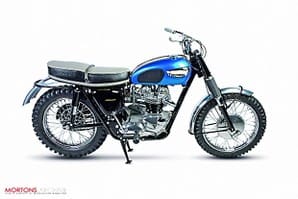 Now, we wouldn’t normally follow last month’s TT Bonneville with a machine that looks – and basically is – so similar but then we decided to put this TR6SC in straight after the TT Bonnie, pretty much for the purpose of compare and contrast.

And though the TT Bonnie last month was a jaw-droppingly good looking motorcycle, this one, if anything, takes it to another level… Restored by expert Triumph pre-oil-in-frame unit twin guru Graham Bowen, few could argue that this 1966 TR6SC is a stunning looking machine. The Pacific Blue and white paintwork, the wide bars, the white handlebar grips, the high rise pipes, the chunky tyres, the overall minimalism…purposeful and cobby, the TR6SC is surely up there in the top 10 list of 'good looking motorcycles'.

It’s quite a rarity too, being one of only 83 claimed to have been built that season. The SC was built just for the American market, designed specifically for desert racing with most of the output going to Johnson Motors (JoMo) on the West coast. Interestingly, standard gear ratios were specified, though a 17 tooth rear sprocket was specified, while the pipes were the same as the TR6C (which came with a wide ratio gearbox) though straight through ends replaced the silencers. Mudguards were alloy, while all road going equipment – lights, speedo and so on – was dropped in a weight saving exercise.

The unit TR6 was a direct descendent of the 1950s model TR6, introduced in 1956 and called the 'Trophy-bird' in the US. Just how good the Trophy-bird – which was basically a TR5 with a 650cc Tiger 110 engine fitted – was is illustrated by the fact in 1956 standard models filled the first three places in the famous Big Bear race, while in 1957 the model filled the first 12 spots!

Around 1960/61 a TR6SC was first listed though by now there was a Bonneville too, with the twin carber taking the ascendancy, particularly in the eyes of the speed men. In 1963, all Triumph 650cc twins switched to unit construction, the TR6SC doing likewise. The model was updated and modified in line with the Triumph range, though dropped at the end of 1966.