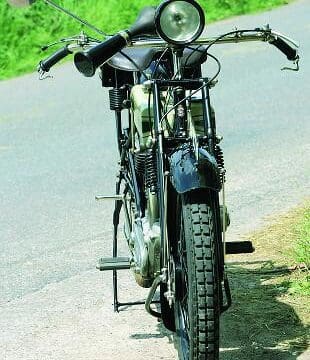 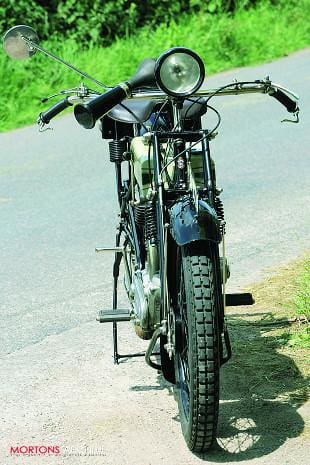 Restoration guru Robin James was at pains to point out to me that this Triumph hasn’t been the subject of a full restoration. “We’ve only worked on the engine, gearbox and forks,” he tells me, as I look over the overall smart but not immaculate vintage Triumph.

The 1923 SD has had a full and proper engine rebuild in the workshops of Robin’s Leominster premises, while Robin and his skilled staff have had to make most of the internal parts for the gearbox of the single cylinder side-valve, while the forks have received prolonged attention too.

“The engine was in a desperate state,” remembers Robin, “And the owner didn’t have any bits. We managed to find a complete but rough engine in Norwich and I flew over to pick it up (Robin is a keen private pilot) though I couldn’t get off the airstrip and was kept apart from the vendor by a chain-link fence at Norwich airport. However, we managed to make the exchange.

“The crankcases of the ‘new’ engine were scrap, but there were some good bits inside, so between it and what we already had, we managed to cobble together a serviceable motor. With engines like these, I often find that what has caused the damage is condensation, rather than wear. Wear is not such a problem; it can be mended. On this engine the corrosion of the cams caused us a huge headache; it had happened because they are not well lubricated. Still, we managed to get there in the end.”

The gearbox also needed a lot of attention. The box is Triumph’s own, designed to replace the Sturmey Archer used on the earlier Model H. It is idiosyncratic in several ways, not least in that it’s a ‘cross-over’ arrangement, with primary drive on one side, final on the over.

“One of the problems with this gearbox,” Robin explained to me, “Is that the gearbox and primary drive oil is shared. It’s not good practice, because while the drive wants thin oil, the gears want thick oil.

Constant source
“Other problems with it (the gearbox) include that to adjust the chain you need to move the box; this provides a constant source of oil leaks and aggravation results. It’s also not a constant mesh box, being of ‘crash’ operation, which means that unless the speed is perfectly matched to the change, the gears just simply crash into one another. You can imagine the effect of this, over the years, on an 80-plus-year-old gearbox.

“Consequently, this one was completely worn out and we had to make new gears and shafts from scratch, as there are no spares available – all these gearboxes went the same way. All the wearing parts were long gone so far as being salvageable was concerned… We made the new gears out of EN36, which is nickel-chromed case hardened steel, that has been around for about 60 years. This should wear better than what was available originally.” 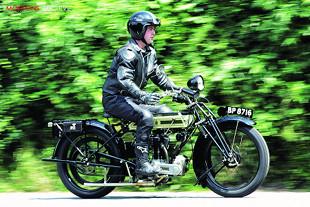 Before it was my turn, I asked Robin for his impressions of riding the single. “It’s desperately uncomfortable!” Robin tells me, “But overall it’s good to ride, it pulls in top gear from low revs.” Robin always ensures that before a machine goes back to a customer, it has been well and truly sorted out. In the case of the SD this means it’s been at Robin’s for three years, as they battle to get it back to its best.

So, Robin entrusted me with the aged single. The seat felt high, more veteran than vintage if truth be told. With slightly down-tipped handlebars it adds to what feels an ungainly riding position, with the rider perched high while the bars feel low. Add to that forward-set footrests and it’s not the most confidence inspiring of stances on which to take to the open road – nor is it particularly comfortable.

Left handlebar
The clutch lever is mounted atop the left handlebar, while the valve-lifter is where one would ‘normally’ expect to find the clutch. This is all well-and-good – until one goes for a gear change and absent mindedly whips in the valve-lifter, cutting the engine… The control for the ignition is also on the left-hand bar, inboard of clutch.

The short, stubby right-sided gearlever moves in a one-back for first gear operation, then forward through the gate, with second straight ahead, then top the next along. The lack of constant mesh in the gearbox means changes are none-too-smooth, at least until several miles are undertaken and a degree of familiarity has been attained. Engine speed needs to be just right for a smooth change, which is sometimes easier said than done, and after Robin had told me of all the time and effort expended on the inner workings of the gearbox, every crunch or grind was greeted by a similar sound from my teeth… 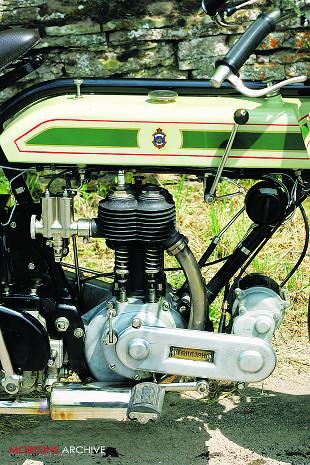 The right handlebar has the air and throttle levers mounted in piggyback style, and they must be used together to maximize performance – not actually together, but to complement one another. Setting off, once one had the drop of the clutch, proved a painless affair with the Triumph tractable from low revs and forgiving, even gentle, in nature.

Moving up through the gearbox, the Triumph gathers speed in a relaxed manner, while I found that changing gear had a somewhat destabilizing effect, in part due to the dropped handlebars and the fact that more rider weight is on the wrists – of course, moving a hand off to change gear causes a redistribution of weight and it’s easy to ‘get a weave on’ but after a few manoeuvres it becomes second nature to compensate and be prepared.

The actual riding experience on the SD felt, to me, much more veteran than vintage – or least the late vintage that I’m more used to. To me, the Triumph felt quite flimsy, more 1916 than 1926, the last year the model was produced. Of course this shouldn’t be surprising, given the model’s basic heritage, but for what looks like such a sturdy and substantial motorcycle, I was somewhat surprised.

The Triumph SD had gone into production for 1920, Triumph having applied for patents for their gearbox as far back as 1916. The SD stood for spring drive – in a patent taken out in 1919, Triumph had designed an arrangement where a multi-plate clutch with a large diameter external coil spring that acted on the clutch pressure plate was employed. There was also a quick-thread shock absorber mounted on the engine drive shaft. The system was designed to take some of the harshness out of the drive. What it also did was give Triumph a model name. 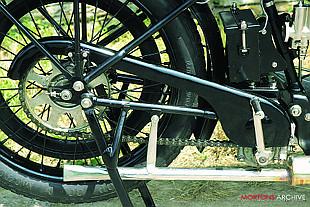 To begin with, the Triumph SD continued alongside the belt final drive Model H, with the all chain drive SD priced at £140. Gradually, over the seasons the SD price dropped, first to £110, then £93-10s, next £83 in 1925 before £66-10s in 1926, its last production year. By then, the market had moved on and the Triumph SD was antiquated and outdated – but it was borne of a fine and proud pedigree and had served its makers well.