Full throttle: The Glory Days of British Motorbikes will be shown on BBC4 at 9pm on October 28. It charts the rise of and celebrates all facets of the British motorcycle industry, touching on war hero T.E. Lawrence, aka Lawrence of Arabia, and his fascination with Broughs, then moving through to the lure off the Isle of Man and how the 37-mile road circuit evolved because of a public road racing ban.

British motorcycle manufacturers raised their game with the TT races and models and engineering improved out of all recognition as engines and mechanical components were rapidly developed to cope with the unique handling and performance demands of the IoM circuit. 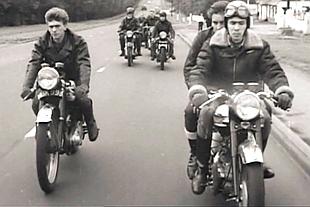 'Full throttle' also explores the British forces' use of motorcycles during WW2, the despatch riders' roles and, post-war, how the surplus of ex military machines flooded the market and led to cheap two-wheeled – and three wheeled – transport, lightening the outlook of a population blighted by years of war hardship and restrictions.

More period footage and interviews describe the years of the leather-clad 'ton-up' boys and how youth embraced British bikes and their culture.

It sounds a must-see documentary, so make an appointment!

Full throttle: The Glory Days of British Motorbikes will be shown on BBC4 at 9pm on October 28. Look out for a guest appearance from The Classic MotorCycle editor James Robinson!