The V-Max was the most American of Japanese bikes: conceived, largely designed and initially sold only in the States. It resembled a two-wheeled Yank muscle-car, with big alloy air-scoops jutting out from the side of its dummy fuel tank. The fact that the chassis was barely able to cope simply added to the impact and reputation.

The Max might have been shaped in the States, but the man who did most to create it was Japanese. In the early Eighties Akira Araki, now general manager of Yamaha’s motorcycle operation in Japan, was the leader of a development team that had been put together to create a new and powerful model for the US market. This was the period when Yamaha was making a huge effort to catch up Honda, at the time hugely into V4 engines with its VF range. Yamaha’s plan was to outdo the Big H by building the mightiest V4 yet.

Dragsters and V8 powered hotrod cars were part of Araki’s inspiration, but on a trip to study the US market it was a visit to an unofficial dash across the Mississippi river that did most to mould the V-Max. The ‘bridge race’ made a big impression on Araki. “Each time two bikes lined up. The rules were simple: they started from one side of the bridge, and the finish line was the opposite side,” he recalled. “The idea I had from this race was to make a bike that was strong in a straight line and really fast. It was the birth of the V-Max concept.” 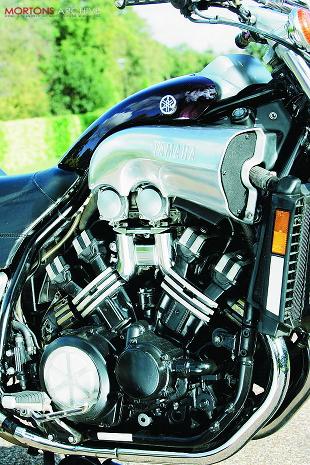 GKDI Design
Araki took his idea of a V4-powered dragster to GKDI Design, an external Yamaha design office based in Santa Monica, California. There he spent almost a month developing his ideas, in collaboration with an engine designer, bodywork designer and a senior Yamaha US product planner named Ed Burke.

Yamaha already had a liquid-cooled 72-degree, V4 engine that had been designed for the Venture Royal luxury tourer, but developing it to power the new musclebike was no easy task. That motor made most of its output at low revs, was hampered by emissions, and its 90bhp maximum output was lower than Yamaha had been hoping for from the tourer, let alone a performance-oriented model.

Conventional tuning mods gave the V-Max unit bigger valves with slimmer stems, hotter camshafts, lightened pistons, and tougher crankshaft and conrods. But still they needed more power. The answer was V-boost, a novel way of linking paired carburettors’ intakes, so that at high revs each cylinder was fed by two 35mm downdraft Mikuni CV carbs instead of one. The remarkable result was a maximum output of no less than 143bhp at 8000rpm, with a significant step when the V-boost kicked in at 6000rpm.

As the engine came together, the styling of the new bike was causing much debate at GKDI. “Components didn’t fit together in the right place,” recalled Araki. “The engine was kind of fighting for space. The designer wanted to place the tank low. We knew it was necessary to show the powerful impression of the engine.”

Radical concept
Eventually the team completed a full-scale drawing, and were enthused by the radical concept machine as they flew back to Japan to present it to Yamaha. The verdict was disappointing. “We received almost no reaction inside the company,” Araki said. “I thought it was because the style was too eccentric for people at that time, and nobody knew how to react.”

Even so, the bike was cleared for production, and in October 1984 it was presented to US Yamaha dealers at a convention in Las Vegas — where it was the star of the show. The dealers’ excitement was matched by strong sales when the bike went on sale the following year. The big V4 looked right, and went right. It stomped away from a standstill harder than any other production vehicle, frequently leaving a black stripe with its fattest-yet 150-section rear tyre.

Before long the cult of the V-Max was firmly established in the States, and a year later the Yamaha went on sale in Europe too. It sold in reasonable numbers on this side of the Atlantic too, especially in France, despite being restricted to 105bhp, partly due to reduce the risk of high-speed handling problems.