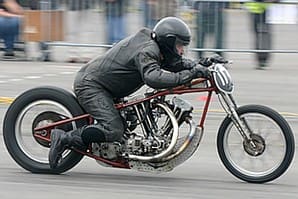 The quickest three in the vintage class, the trio of Henry Body and Bernard White on Douglas twins and John Young on his Triumph-JAP, battled it out ahead of Roy Siddall on his New Imperial.

There were plenty of older bikes in the racing classes with experienced Bantam tuners and racers Tom Miller and Brian White nearly matching one another’s performance. Tom managed to finish ahead by five hundredths of a second.

Ray Law on his genuine Sixties double engined Triumph finished second in class. Bob Anderson continued his struggle with his Alf Hagon V-twin replica still reluctant to fire on both cylinders. Ian Dentith finished the day with problems to solve on both his immaculate but loud early postwar Triumph twins.

Among the day entries, Ewan Cameron had turned up with no fewer than three V-twin powered machines, including the unique Halec three-wheeler device.

When the rain finally arrived in the early afternoon, most riders had already completed their six runs.