Visitors to the National Motorcycle Museum may well stare in disbelief at the name on the tank (and, for that matter, engraved on the valve covers) of a beauti­ful, pale-green vee-twin. "Watsonian?", they may echo; "But they're sidecar makers, not bike builders!" True enough so far as it goes — yet Watsonian did indeed build just one motor cycle, and had things worked out then there was every chance that they would have gone into production with it.

Son of Fred Watson who founded the famous sidecar firm, Ron Watson reveals the thinking behind the model. "If only Brough Superior had returned to the market after World War Two, there would have been no need to consider motor cycle manufacture ourselves. But in the absence of the Brough there was no really suitable de luxe big twin for sidecar haulage.

"We felt there was still a place for a hefty side-valve vee-twin, though it would certainly be a rather limited field, and so we got in touch with the JAP company. The year was 1948, and it so happened that they already had a prototype engine that sounded exactly the kind we were looking for. It was a beefy all-light-alloy 50-degree side-valve twin of 998cc, which produced somewhere around 35 bhp. Design was a considerable improvement over pre-war JAP twins, and it was possibly the first motor cycle engine to dispense with a Magdyno and, instead, incorporate an alternator unit. The alternator was housed in an extension to the timing chest, and from the rear of the chest there projec­ted a car-type distributor. There was a rec­tifier and battery and, of course, coil ignition. 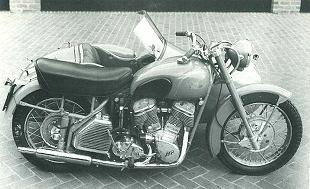 "JAP let us have one of these engines and we designed the bike around it. Really, the design was a team effort, with myself, Tim Reid (who rode in the 1939 Senior TT, and later joined the BSA design staff) and Eric Oliver all contribut­ing various ideas. One of my own con­tributions — we took out a patent on it ­was a method of adjusting the footrests for both height and angle.

"The company spent a considerable amount of money in developing the machine and when we felt that we had got it near-enough right, we approached JAP and asked them to quote us for a supply of engines. But that was where the whole project foundered, because it seemed that we were JAP's only potential customers for that particular engine, and they wouldn't consider tooling up for produc­tion unless we placed a firm order for at least 500 of them; they just weren't interested in building any lesser quantity. Each engine would cost us something like £100, which was quite a lot of money for the time, so it meant we would have to commit ourselves to an outlay of £50,000 for engines alone. That just wasn't on.

"In any case, it was 1950 by this time and we were getting very busy with orders for sidecars so, rather reluctantly, we had to shelve the idea. There was always a hope that at some time or other the project would be revived, but it never was."

Racing sidecars
Actual erection of the machine was done by Ben Willetts, whose name is more usually known in connection with the building of racing sidecars. The frame is a duplex tubular design incorporating plunger-type rear springing, and the steer­ing head is reinforced with steel-plate gussets to give ample support to the upper front sidecar strut. Front suspension is by an undamped Dunlop telescopic fork with rubber in compression as the suspension medium. Neat touches are the housing of the speedometer in the fork top yoke, and the use of tubular chromium-plated brac­kets to carry the headlamp (and note the underslung parking lamp, a familiar feature of machines of the period). 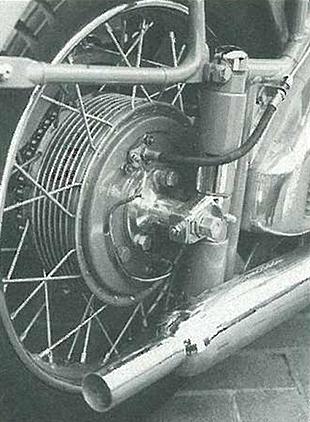 Watsonians were definitely first in equipping a motor cycle with twin-leading ­shoe brakes at front and rear. The brakes are mounted in 9in-diameter, full-width light-alloy hubs with iron liners, and though as at present exhibited the front brakes are mechanically-operated and the rear are hydraulic, during the development period the Watsonian twin could be seen with mechanical brakes front and rear — or hydraulics at both ends.

"Brake development was carried out in association with Girling," explains Ron Watson, "and in particular with pre-war TT winner Tyre11 Smith, who devised a very effective hydraulic 2LS front brake, complete with reservoir canister. However, we eventually settled for a mechanical front brake and hydraulic rear."

Totally in keeping with the majestic appearance of the big vee-twin is the massive 5.25-gallon fuel tank. Noteworthy, too, is the 1.25-gallon light-alloy oil tank which fills the gap between frame rear tubes on the right; the oil tank is a com­posite fabrication of sheet alloy, and a ribbed cast-light-alloy outer face.

While under development, the machine was usually attached to a coachbuilt Wat­sonian Avon sports sidecar, but as now presented it is hitched to a Monaco. This, too, is of historic significance, for although the Monaco chair was not introduced into the Watsonian catalogue until 1954, it had been under development since 1950 and is therefore almost contemporary with the motor cycle. Moreover, the Monaco was the first sidecar in the world to employ glass-fibre construction.

Well… part glass-fibre construction, anyway. In fact only the nose and rear section are glass-fibre, and the centre sec­tion is of steel. This is because the Mon­aco has no sidecar chassis as such, and is of monocoque construction with the cock­pit section reinforced to carry the attach­ment struts and the sidecar wheel.

Eminently practical
The system is unusual but eminently practical, as Eric Oliver was to show when — just to prove a point — he competed in the 1966 Sidecar TT using a roadster Norton Dominator 88, while passenger Mrs. Pat Wise remained normally seated in what was essentially a standard Watso­nian Monaco touring sidecar. They finished sixth, ahead of quite a few proper racing outfits!

It was the success of the Monaco that led Watsonian, in time, to turn over com­pletely to glass-fibre sidecars; even the commercial box outfits they supplied to the AA for road patrol duty. 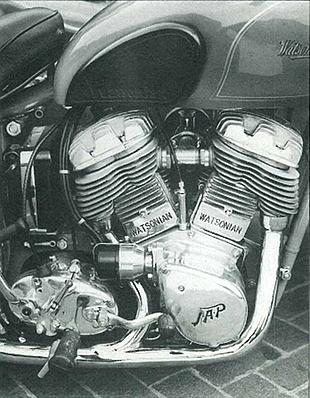 After languishing for some years in the recesses of Watsonian's old works in Albion Road, Greet, Birmingham, it was disinterred and despatched on loan to the National Motor Museum at Beaulieu. There it was to remain for over a decade, but with the opening of the magnificent National Motorcycle Museum premises, just opposite the NEC complex outside Birmingham, Ron Watson felt that this would be a more appropriate home.

And so the bike came home to the midlands, but at that time it was dressed in a rather shabby black, and when total restoration was undertaken by Colin Wall, the museum's chief restorer, it was, perhaps understandly, given a smart new black livery. However, investigation showed that initially it had been painted in BSA Mist Green, the shade used on the BSA Bantam and S7 Sunbeam ("We used to say it was Pale Apple Green," says Ron Watson, "but it was actually the same paint that we used on sidecars that were to be hauled by S7 Sunbeams").

A stickler for having things dead right, the museum's Founding Trustee, Roy Richards, decided that the bike would be painted yet again, this time in Bantam Green — in fact, Ford Ludlow Green — as originally. Watsonians, meanwhile, had located a suitable early Monaco sidecar, and this was completely stripped and rebuilt at the new Watsonian factory on the industrial estate at Blockley, Glos. Finally, the restored bike and sidecar were brought together, the wedding ceremony being performed at Blockley, and the com­plete ensemble was delivered to the museum, to form one of the newest and most intriguing exhibits of the whole collection.