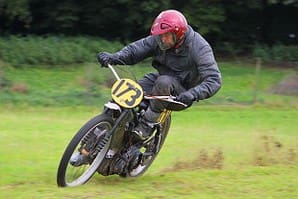 The machinery is equally varied, consisting of grass track and off road bikes from a time when market demand was met by many small-scale operations, most of which are now memories. Chalfont offered a further chance for exercise.

The Vintage, pre 1934, class was a straight battle between Stuart Towner and Matthew Hopkins, both Rudge-mounted. Matthew looked good for the honours until Stuart's final effort turned the tables.

This year, the pre-75 250 class was well supported, but the BSA four-strokes and AJS two-strokes could not match the speed of the Japanese bikes.

The vastly experienced Chris Mackett looked very quick on his 500cc 1965 Hagon-JAP, but had to settle for a class win as Andy Gomm (500 Jawa), running in the four-valve class, finally matched his time. It looked like a run-off to determine the trophy for the fastest time of day until Andy went three-hundredths quicker.

An excellent day's sport was concluded when winners and also-rans all attended the prize-giving at the end of the day.