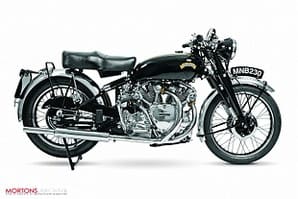 Bill Bewley, a well-known face on the classic scene, is a dedicated Vincent man, though his tastes are not restricted purely to the Stevenage-built machines, as other steeds in his stable include a pair of vintage Sunbeams, a featherbed cammy Norton and a Douglas 90 Plus, to name a few. Obviously, then, he’s a man of discerning taste, so it’s no surprise that this super Rapide is not his only Vincent – others include a Series B Rapide, a Series C Comet, a Black Lightning replica and a Series A single too.

The Cumbrian company director – of Windermere Lake Cruises – bought this Rapide in 2003 and had it restored in the remarkably quick time of a year. Not only speedy, Bill’s restorations are of top quality too. Indeed, his Series B Rapide won best in show at Stafford in 2003 and then went on to the final of the Carole Nash Classic MotorCycle of the Year competition, where it triumphed in the final at the NEC show in November, while he has picked up numerous other concours prizes over the years too.

This Rapide is, for the most part, standard, though the addition of a Black Shadow speedo is the kind of thing one would have expected to find added in the period. Indeed, Bill is a fan of the ‘big clock’; there’s one atop the handlebars of his B Rapide too.

Bill is a long time member of the Vincent Owners Club and praises the organisation’s spares scheme – indeed, everything needed for a Vincent twin is now available, as exampled by the club’s building of a completely new Black Shadow. This spares backup means that Vincents are generally ridden and not hidden, which is Bill’s ethos too. Although his stable of machines are all immaculate, they go well too, with Bill a regular competitor (and winner) in all manner of club events.

The Vincent motorcycle was the dream of company founder Phil Vincent, brought to life. Though the 1930s Series A Rapide is the most sought after of all the Vincents, that was a compromise and really it was the C – as here – that was closer to Vincent’s own dream. The A relied upon proprietary forks and transmission – the latter which proved its Achilles heel. Basically, the V-twin was churning out too much power and so clutch slip was a regular problem. However, with the B – launched immediately after WWII – Vincent switched to its own gearbox; the ideal was one step closer.

It still though relied upon proprietary forks and it wasn’t until the C (which roughly coincided with the replacement of the HRD name on the tank with the Vincent moniker) that Vincent added own made forks. Now, all the main components were Vincent-made and although there were modifications to the D Series, to many it’s the C Series machine silhouette that defines Vincent motorcycles. And there aren’t too many finer examples of the Series C Rapide than this example.