“I believe you guys call it the plumber’s nightmare — round here we simply call it the nightmare”, laughs Stan Gillis, the American restorer who had the job of making the 1939 HRD Rapide on these pages roadworthy after decades of inactivity. The glittering 1000cc V-twin, which left Britain over 20 years ago had languished as an unfinished project before its current owner set about realising his dream of possessing the world’s finest Series A Rapide. He’s Texan Herb Harris, a 53-year-old lawyer who also possesses a unique collection of sectioned British engines.

Herb acquired the early Vincent twin five years ago, at which point previous owner Mike Fitzsimons, a leading classic British machine exponent living in Connecticut, had been working on it since the Seventies. He’d bought it from someone in England who had made little progress with a rebuild over 20 years. But despite Mike’s best efforts, collecting parts by scouring UK jumbles and advertising in the VMCC Journal, he wasn’t able to finish the restoration before he switched his core interest from Vincent HRD to Brough Superior (his Brough Alpine Grand Sports was featured in TCM December 1998). Mike sold the Series A Rapide to Herb for approximately £25,000 as ‘work in progress’.

Affluent lifestyle
Stan, who is 56, gave up being president of a bank and the affluent lifestyle that goes with such a post in order to work full-time restoring classic motorcycles.

“I decided that personal happiness was more important than new cars and big houses. In the motorcycle restoration world I’d seen what other people were doing and thought, ‘I can beat this lot!’” He restored a 1938 Triumph Speed Twin which was sold to the Barber collection in Alabama and later chosen to feature in the prestigious Guggenheim Museum Art of the Motorcycle show. Stan was taken on by Herb to look after his stable of classics based in Austin, Texas – and to help him restore concours-winning machinery, including the daunting pre-war V-twin.

“It’s the biggest challenge I’ve encountered so far. Herb described this project as testimony to perseverance, talent and unlimited funds,” he smiles. Numerous specialist companies and skilled individuals were involved in the two-year completion of the restoration, which gained momentum after the gleaming, finished fuel and oil tanks promised that the nightmare could turn into a dream machine.

On the petrol tank, pitting on the old, paintless, stainless steel side-panels was studied carefully to establish the exact shape and form of the painted panels, which on the restored tank are lined out in sized gold leaf, as on the original. The decision to finish the machine with the optional maroon tank finish was based on Herb’s premise that “…there are enough black motorcycles in the world already.” 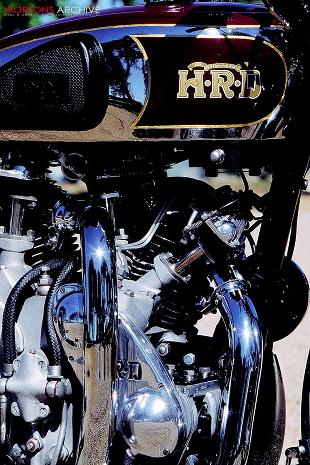 A chrome plating plant had its patience tested by the wheel rims, with their two types of plated finish: bright on the bare metal and matt to receive the central band of coloured enamel. The paint used was Imron, a DuPont  two-pack product not recommended for amateurs. Its toxic ingredients mean that use is controlled by health and safety regulations and similar, ever-stricter, controls are also putting pressure on platers.

“EPA (Environmental Protection Agency) rules have tightened up tremendously here in the last 10 years,” Herb explains. “Some platers are being driven out of business and we heard of a guy who nearly went to prison for storing used plating fluids on someone’s property. Cadmium plating is now only done in certain States. It can make life difficult.”

While the cycle parts were being prepared, the engine was entrusted to one of America’s best-known Vincent specialists, the late Dick Busby of Culver City, Los Angeles who, assisted by Haig Altounian, rebuilt the unit with new components where needed. In preference to the standard 3X cam, a ‘warmer’ 4X grind has been used.

The prominent cover for the ‘upside-down’ Lucas Magdyno’s chain drive bearing the HRD logo is newly-made, replacing a badly pitted original casting. Although the Burman clutch is the Achilles Heel of the earliest Rapide when its lusty power is turned on, Herb opted for an original, rather than modernised, set-up. (Prewar Vincent parts specialist Conway Motors can invisibly convert to a reliable Honda clutch).

The exhaust system is an Armour production, patterned on original equipment loaned to the Bournemouth company by Vincent guru Bob Culver. Two other Europe-based Vincent stalwarts who gave Herb valued help and advice with the project were John Kidd and Bob Stafford.

A local saddler replicated a Dunlop seat cover and the pillion pad came from Michael Maestas of Sylmar in California, described by Herb as ‘the absolute genius of upholstery’. The existing dial faces of the instruments were cleaned up carefully to preserve their authenticity and the eight-day clock still contains its old Smiths movement. Original silvering has been salvaged inside the Rapide’s big 8in Lucas headlamp.

This machine has 20in wheel rims front and rear — the rear is usually a 19in size — and suitable Avon tyres were sourced from a batch ‘smuggled’ into the US: the obsolete size does not carry Department of Transportation approval. The alloy mudguards with flat stays are the TT type, offered as an option on the Rapide.

Herb admits to one non-standard feature though: the well-stuffed tool roll is from a Series B twin!

When finished, though not fully sorted for road use, the Rapide was shown at Southern California’s big Del Mar classic concours, where it won the Best British award. Its next outing was the 1998 Mid-Ohio Vincent rally, where it was voted Best in Show. Then it was taken to the smart 1999 Louis Vuitton car and motorcycle event in New York City, when Herb rode it briefly and gently on Manhattan Streets.

“You’ll be the first guy to get this thing out of low gear in over 40 years!” beams Herb as Stan tickles the carburettors ready for me to take a test ride in hilly country west of Austin. The V-twin engine bursts into life and, as I linger to be sure that the uneven beat of cylinders in a 47 degree V will settle to a reliable idle, I make a mental note to take special care of this immaculate object. Setting off, I advance the manual ignition lever on the left ’bar and feel an immediate forward surge. Like a post-war Vincent, the Series A feels compact and well balanced as it gathers speed on a quiet single carriageway road through a drought-parched landscape. The four-drum brake system is reassuringly effective and the cantilever rear suspension gives a comfortable ride, although I was amazed at the crudeness of the damping: adjustable rings lined with friction material that are tightened against the moving sections of the spring boxes. 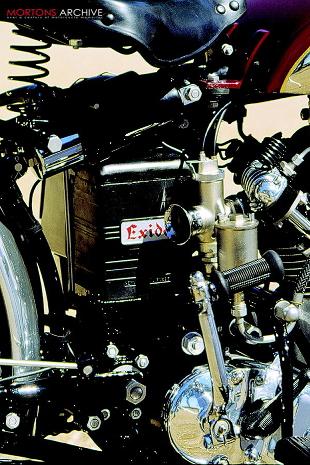 Making leisurely but decisive gearchanges as befits the Burman gearbox, I soon have the twin burbling along nicely in top gear. It heels securely through a series of right-angle bends taken in third and as I get more adventurous I find cornering limits — for me, at any rate. The warning comes as I power through the right-handed portion of a downhill ‘corkscrew’ S-bend typical of this area and the rear wheel skips sideways on ripples.

Opening the throttle and aiming at a crest where pale grey tarmac meets deep blue sky, I feel a surge of power building — but it then seems to die away, as though there is fuel starvation.

Returning to our starting point at a crossroads by the old Driftwood Country Store, an ancient monument by local standards, I return the machine to Stan, who gives the engine a look over and suggests that all is not well with the front cylinder’s ignition. We return the HRD to the pickup truck and adjourn to a local restaurant for an enormous Texas-style lunch of chicken and fried steak. On later investigation the engine problem is solved. When a new cam ring was made for the magneto, the machinist used an existing 50 degree type as a pattern. While the component would suit a post-war twin with that V angle, its variation from the A’s 47 degree configuration was obviously enough to produce rough running.

It’s commonly known in the concours world, both in America and Britain, that newly-completed machines often get shown before they have been shaken down to run properly. And with such an ambitious restoration of a rare and quirky machine, teething troubles were probably inevitable.

“To fully complete a restoration of this quality takes endless resources in energy, time, money and travel,” Herb says. “This is probably the most complicated motorcycle I’ve ever seen. That’s what draws me to it.” Luckily for the rest of us, there are people like Herb with the long term stamina to see such a challenging project through to such a glorious conclusion.