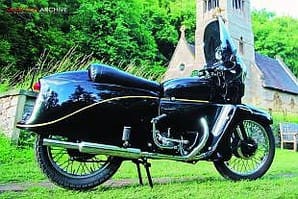 Effective armour and high speed rarely combine in nature, save in those instances where man has defied evolution. Such combinations are usually memorable, as when Edward of Woodstock carried a weight of protection into battle on his powerful charger during the 14th century, or when British Railways standard class 9F locomotive 92203 hauled heavy freight at up to 80mph during the middle of the last century.

History bestowed the epithet of ‘The Black Prince’ in both of these cases and the title seems to suit the heavily shrouded flagship model of the fourth series of V-twin motorcycle from Vincent Engineers (Stevenage) Ltd, which made its public debut at the 1954 Earls Court Motorcycle Show.

Philip Vincent had begun experimenting with glass fibre applications after WWII, eventually designing a water-scooter called the Amanda that was a forerunner of today’s jet-skis. Consequently, the so-called Series D touring models (including a stillborn single-cylinder Victor prototype) marked a departure from the minimalist Vincent-HRD design philosophy (the famous initials were dropped from 1950).

Extensive glass fibre bodywork was the most distinctive feature of the new range, its execution reflecting typical Vincent go-it-alone innovation. The Black Prince benefited from engine components selected to Black Shadow specifications, along with tighter engineering tolerances than the Rapide-based Black Knight. 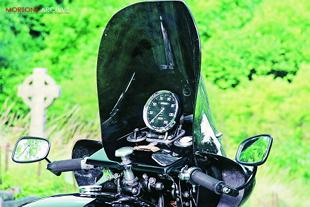 Weather protection and streamlined design became new selling points as the small Hertfordshire-based firm felt sufficiently confident in the quality and appeal of its product to abandon its established image of a stripped-down high performer. Such a move speaks volumes about the venturesome nature of its proprietor, Philip Vincent. Engineering graduate Vincent had never been afraid to lead the market, though he must have been aware that full enclosure had simply not created a satisfying motorcycle since the quirky Ner-a-Car of 1921.

Retired BT engineer John Daniels, now 71, remembers this bold strategy well. A lifelong Vincent fan, his admiration for the new models in 1955 outstripped his funds, which nevertheless ran to the purchase of a year-old Comet for £120 from his local bike shop, Gray’s of Birmingham. “I never thought of it as ‘half a Vincent’, since it performed so well at everything,” he says. “I sold it for £100 when my first daughter arrived, but bought it back again when the new purchaser kept falling off it. I still have it, as a basket case, awaiting restoration in my workshop.”

However, the prospect of a full V-twin remained enticing and John was particularly delighted to get his hands on a Black Prince exactly 40 years later for a low five-figure sum. “It was the ultimate V-twin as far as I was concerned,” he recalls. “The last of the Vincent line, with all that accumulated status.”

The Black Prince had been standing idle since the 1970s and needed thorough cosmetic refurbishment. John, who is a former executive committee member of the Vincent Owners’ Club, kept to standard specification wherever practicable. He praises the VOC Spares Company (01925 753367), which is allied to the owners’ club although it operates independently, from premises in Cheshire. “I can get just about any part I want delivered to me the next day,” he enthuses.

Black Shadow
A previous owner has substituted a five-inch diameter Smiths speedometer from a Black Shadow and John will eventually replace this with the standard three-inch item. His electrical engineering background dictated that a solid-state voltage regulator should replace the electro-mechanical original, located behind the engine, although he resisted the temptation to upgrade to 12v. NGK spark plugs and plug caps have long ago replaced the KLG originals.

After sending the glass fibre off for a professional respray, John applied new gold leaf pinstriping to the front mudguard, continuing the line below the fuel tank to the rear cowling and down beneath the numberplate. He tells me that the black Perspex windscreen could be specified as an option from the Stevenage works, its narrow curvature allegedly resulting from heating against an oil drum former. 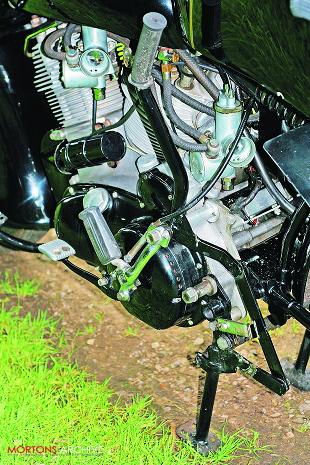 At first glance, the Black Prince looks as fiddly to work on as any modern fully faired sports tourer, yet access is surprisingly simple. Loosen a nut on each end of the swinging arm spindle and the entire rear cowling pivots on a hinge behind the petrol tank, coming to rest almost vertically. Support in the upright position comes from a folding prop stand that engages with a lug in the swinging arm on the nearside, making rear wheel maintenance and removal straightforward.

The swinging arm supports a shaped metal splashguard, the rear cowling acting in place of a full mudguard. A single Armstrong damper unit bolts to the rear of a short tubular spine of 1 1/8in diameter, which bolts to the headstock. A second Armstrong unit forward of the headstock controls the vertical movement of the Girdraulic forks. There’s one half-width rear drum brake, mounted on the drive side without tommy-bars, and both wheels are of smaller diameter than on the Series Cs.

Although the swinging arm retains its rear stand lugs, the Series D models feature the most over-engineered centrestand ever to support a motorcycle. Its long hand-lever requires little effort to support the machine (and equally little to dislodge it by accident), curving neatly over the vented clutch cover when not in use.

The dual seat hinges forward and would normally lock down by means of a catch, operated through its pillion padding. However, these catches were flimsy and tended to break. There is space for a toolkit next to the oil filler cap beneath the seat. The oil tank bolts to the offside rear diagonal subframe tube and so pivots upwards with the rear cowling. Its filler neck contains a bleed screw for the rear chain oiler and like many owners, John has hung a small magnet from it to catch stray particles of swarf. Both pillion footrests bolt to the lower rear sub-frame tubes.

Three knurled alloy knobs retain each of the engine cowlings. Front crashbars are integral to the design, mounting side-wing extensions that are essential to direct cooling air behind the broad blade of the front mudguard and onto the engine. The motor itself is black only upon its exposed timing and primary cases, having die-cast crankcases and plain alloy cylinders.

Timing chest
The black fuel tank is unadorned, the maker’s name being cast into the timing chest and primary case filler plug, and proclaimed upon transfers on the front mudguard and rear cowling.

John frequently undertakes short tours to Wales from his home in the Royal Forest of Dean, but is conscious of the need for security when leaving his valuable machine unattended. He has ridden his Black Prince as far afield as the VOC 2003 Canadian Rally, when the only mishap occurred during freight transport. “Someone’s footrest went through the fairing,” he recalls, ruefully.

Fortunately, glass fibre is easy to repair and the Vincent displays no signs of damage as I inspect it prior to a ride. The bike carries the usual signs of road use and John happily admits: “I’m not a concours man, but more of an oily rag man since I prefer riding bikes to polishing them. I certainly enjoy the fact that the Black Prince’s bodywork is easy to clean.” 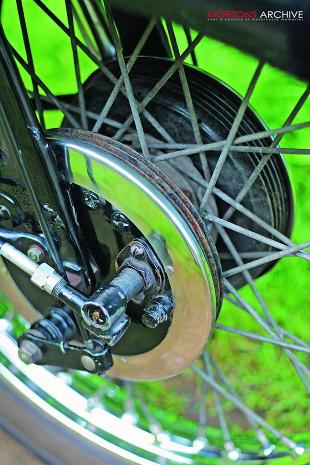 The adoption of coil ignition on Series D models introduced an ignition key, which is obscured from the rider’s view by the oversized speedometer currently fitted. I apply the twin choke levers located on the right handlebar and the decompressor lever on the nearside. The knack of kick-starting these V-twins depends on following through with constant force the pedal swing from top dead centre of the rear cylinder.

First gear, engaged with a lift of my right boot, is extremely tall and I’m grateful for a grab-free action from the semi-servo clutch. The handlebars oscillate as I pull away, causing my knees, positioned halfway along the fuel tank as I peer over the black screen, to grip more tightly. As I accelerate briskly through the gears, I’m aware of reflected mechanical clatter from the engine, although the cowlings’ rubber-mounted attachment points seem to inhibit resonance successfully. The motor’s formidable torque compels me to brace against the narrow, low handlebars in this upright stance.

Handling in corners on the lanes around Goodrich Castle is surefooted, although the feeble brakes remain a curse of these high-performance models, even with the supportive metal plate fitted to the front linkage on Series Ds. Hence, on minor roads in particular, the wide spacing between gears means that I tend to hold on to the lower gears to induce the assistance of engine braking.

A blast down the dual-carriageway A40 towards Monmouth brings the engine on-cam, but prompts a persistent weave above 75mph, just as the bike is getting into its lengthy stride. I suspect the combination of an Avon SM front tyre and a well-worn TT100 rear, but must also question the fairing’s susceptibility to gusting side winds, blowing from the nearside front quarter.

Denied the opportunity to explore the upper reaches of the Black Prince’s performance with total confidence, I muse on the reaction of loyal Vincent customers, not to mention the wider motorcycling public, to full enclosure. Developed without the benefits of a wind tunnel, the new form was a brave attempt by Vincent to push motorcycling to a new level. The Motor Cycle duly reported favourable handling, noise levels and fuel consumption compared to a Series C twin. But the real point was, who on earth would want to cover it all up?

John knows that not everyone sees both style and substance in his heavily shrouded machine. “Unlike many Vincent purists, I actually like it,” he says. “I find it effortless at sustaining relatively high speeds while the extra sub-frame assemblies of the later models, with their improved seating comfort, make a real gentleman’s tourer. I’ve got wet enough racing sailing dinghies during the last 35 years to really appreciate that fairing!” 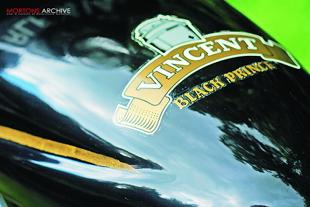 That proprietor Philip Vincent anticipated developments in weather protection, image, styling and suspension by a full quarter century is remarkable, but his insistence on low-volume exclusivity ultimately backfired in terms of high cost and limited popular appeal, just at a time when his company’s sales in the UK and America needed revival. Vincent tried to recapture lost ground by marketing ‘naked’ bikes when quality issues interrupted the supply of glass fibre, but it was too late. Barely more than 200 fully enclosed machines had been built by the time Vincent motorcycle manufacture ceased altogether, on 16 December 1955.

A fully enclosed Black Prince was the final motorcycle to be assembled and was labelled as such by factory staff, although a small number were subsequently built up from spares. Still extant, ‘The Last’ machine made £40,230 at the H&H auction in Cheltenham early this year (2007). Although doomed to a low-key and premature end to its campaign, the Black Prince’s distinctive armour retains the power to evoke former glory.