Where's Thruxton, you ask? It's an aero­drome circuit, not far from Andover, and there the Southampton Club ran (in the fifties and sixties) a series of long-distance produc­tion machine marathons, known at first as the Thruxton Nine-Hour, and later as the 500-Miler. Competing in the 500cc class, Velocette singles were usually well in the pic­ture, culminating in a class win in the 1964 Thruxton for Alan Harris and Howard German, sharing the saddle of a Clubman Venom, with other Velocettes filling second and third spots in the class.

Well, it so happened that the Hall Green factory was about to introduce a new clubman-racing model for the 1965 season and there, ready-made, was a model name. The Velocette Venom Thruxton it became. Yet there was a subtle irony about it, for the surface of the Thruxton perimeter track was breaking up, and for the 1965 event the organisers had to move to Castle Combe's airfield. 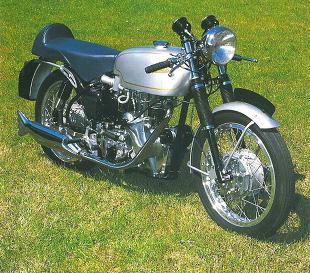 There, Velocettes again won the 500cc class, this time with Joe Dunphy and David Dixon sharing a Velo Thruxton prepared and entered by enthusiastic dealers L. Stevens of Shepherd's Bush. But it was too late then to rename the machine — and in any case, Velo Castle Combe doesn't trip off the tongue so readily!

Still, for the pedigree of the model we have to travel right back to 1933, when Eugene Goodman (of the Goodman family who con­trolled Velocette fortunes from start to finish) instituted the first of the M-Series machines. This was the 250cc MOV, which broke away from the overhead-camshaft K-Series engine that had thus far carried the company's colours in the four-stroke field and, instead, offered short and stiff pushrods operated from a camshaft mounted high in the timing chest and driven by a train of gears.

The MOV was to be followed, first by a 350cc version (the MAC) and then by a 500cc (the MSS). But in post-war years the original long-stroke MSS was replaced by a redesigned 'square' unit of 86 x 86mm; this was in 1954, and since the square MSS was the true ancestor of the eventual Thruxton, we ought to examine it more closely.

Notably, it had taper-roller main bearings, and for the first time (on a production roadster, anyway) the engine was all-alloy, with an Al-Fin cylinder barrel (having a bonded-in iron liner) and cast Y-alloy head with shrunk-in valve inserts of austenitic iron.

Development didn't stand still, and in October 1955 the Hall Green people announced a re-entry into the sports field, with a pair of high-performance machines known respectively as the 350cc Viper and 500cc Venom. The Venom was directly derived from the MSS, and used the bottom-end assembly of that model — and though it might have seemed logical to base the smaller Viper on the 350cc MAC, in truth the Viper, too, was an MSS derivative; the stroke was 86mm in each case, but the Viper had a bore of 72mm (by comparison the MAC, which continued in the range, had dimensions of 68 x 96mm).

Hairpin valve springs
Main features of the new sports singles were enclosed hairpin valve springs, high-compression pistons with domed crowns, and light-alloy wheel hubs. There was, too, a rather startling departure from the con­servative black finish (with gold lining) that had always distinguished Velocette models, for the Viper and Venom had chromium-plated mudguards and fuel tanks. 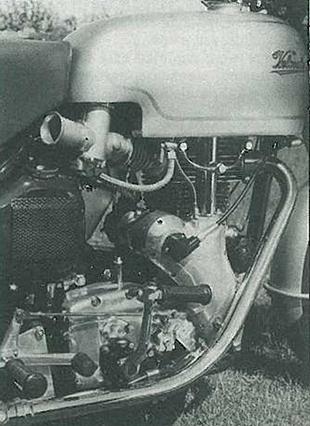 That the Venom could be made to go very quickly indeed was soon apparent, and the advent of production-machine racing led to a demand for accessories to make it go quicker still. Production racing regukations would only permit the use of such items if they were catalogue-listed, and so Velocette's began to offer, at extra cost, a close-ratio gear cluster, rev-meter drive, and so on.

In the autumn of 1964 came the big news that a racing cylinder head, complete with 13/8inch choke Amal GP carburettor, and a twin-leading-shoe front brake would be added to the list of optional extras, endowing the Clubman Venom with a claimed potential of 135mph. Though the public hadn't realised it yet, the 499 cc Venom ThruxtOn model was on its way.

The complete bike made its debut on the Velocette stand the same November, at London's Earls Court Show — and a real show-stopper it proved to be.

"More than any other model in that group" (of supersports roadsters tailored for marathon racing) "the new Thruxton 500 version of the Velocette Venom simply oozes tradition", enthused The Motor Cycle's technical editor, Vic Willoughby. "A lusty big single with obvious strains from its long racing and record-breaking ancestry . . . An increase to 2in for the size of the inlet-valve head (outside diameter, mark you, not throat) is an obvious talking point because that's not only large, it's a nice round figure. But no less important is an alteration in the valve geometry aimed at improving reliability."

Vic went on to explain that although the valve stem-tip spacing remained unchanged, to obviate any need to alter the rocker gear, the valve included angle had been narrowed from 70 to 67.5 degrees, so that the valve heads would be less likely to tangle were the engine to be over-revved. The carburettor angle was steepened, and the inlet tract was lengthened as the result of bench testing; in turn, that meant off-setting the carb, and fit­ting a somewhat squatter oil tank, so that the engine could be installed in the frame. By the same token, the right-side tail of the fuel tank was slightly cut away.

Modified cam followers
There were modified cam followers and heat-treated crankcase castings, and the engine was now claimed to belt out 41bhp (at the crank!) at 6,200rpm when fitted with the traditional Velocette fishtail silencer, or 44bhp on an open megaphone.

Light-alloy wheel rims, and the alternative gear cluster, rev-meter drive, 2LS front brake and other goodies were now brought within the complete package. Nor was that all, for there was the added bonus that the Velo Thruxton looked so downright handsome. Gone was the square-looking tank and Perspex nameplates of the Venom Clubman; gone, too, the somewhat amateurish head­lamp nacelle. Instead there was a deep and smooth tank in silver, lined in gold and bear­ing old-style Velocette name transfers, a frame and oil tank in dark blue, with a blue-tinted dual seat to match, a chromium-plated headlamp and a gaitered front fork.

Yet for all the super-tuning, the machine remained thoroughly road-worthy, as David Dixon proved by borrowing. the prototype from Stevens of Shepherd's Bush and, through pouring rain, taking it to Mallory Park, Silverstone, and Castle Combe — with some swift lappery at each circuit in turn— all in a single day. He did it, too, though with reservations about the insensitive rear-seat footchange arrangement. "Cruising at 90-plus proved well within the Velo's scope", he reported, "and at this speed there was no appreciable vibration."

Average fuel consumption for a somewhat hectic day's ride of something over 350 miles, was around 55mpg.

Well, the comments about the awkward change must have borne fruit, for as was remarked earlier, David and co-rider Joe Dunphy were victorious in the 500-Miler run at 1965's substitute venue, Castle Combe. Two years later, production-machine racing came to the Isle of Man, and in the 500cc class of the first Production TT, Thruxton Venoms in the hands of Neil Kelly and Keith Heckles finished first and second, Kelly's winning speed being 89.89mph.

Later still, The Motor Cycle carried out a full road-test, when the Thruxton produced a "Best One-Way" speed of 114mph— yet at a consistent 30mph, it was able to return a con­sumption figure of 96mpg. There's versatility for you! But it has to be said that the test machine was one borrowed from a private owner, not the factory (though Hall Green did give it the once-over), which was a pointer to the way the wind was blowing.

Truth was, Velocettes were running into financial trouble, and just couldn't afford to build a road-test bike themselves. They were absent from the 1968 Motor Cycle show, and by 1970 were no longer in a position to trade. In all, just over 1,100 Thruxton Venoms had been built, and the 1967 model in the National Motorcycle Museum collection rep­resents the short-pushrod Velocette single at the pinnacle of its development.