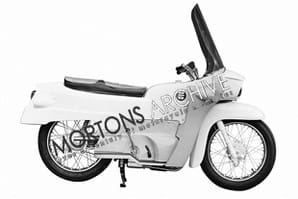 Though Velocette’s ‘Little Engine’s shouldn’t really include the Viceroy – it was a completely different unit, after all – as the Owners’ Club makes them welcome, we thought it admissible to include them here.

Originally conceived as that elusive ‘everyman’ machine, Veloce Ltd hoped the new model would lead to a bright and shiny future for the Birmingham-based concern. Though it was a success of sorts (30,000 plus were made), it wasn’t the overwhelming commercial triumph the men behind it surely hoped.

1948 Velocette LE Mark 1
Launched in late 1948, the new LE was a revolutionary machine, unlike anything else. Of just 149cc its transverse cylinders were water-cooled, it had rear springing, telescopic forks, unit construction and shaft drive. In a strange move, it was side valve and had a three-speed handchange gearbox, which was somewhat at odds with its advanced features.

1951 Velocette LE Mark II
In response to criticism of its lack of power, in 1951 a Mark II was announced, with a 43cc capacity hike, giving 192cc. Externally it looked similar to its predecessor, but there were internal improvements; a stiffer crankshaft, a new camshaft and uprated transmission.

1957 Velocette LE Valiant
The ohv version of the ‘Little Engine’ concept reverted to air-cooling, while there was also a stronger crankshaft, to cater for the new engine’s extra power – which was double what the LE produced, boasting 12bhp as opposed to the side valver’s six. Around 1600 were sold.

1958 Velocette LE Mark III
Mark III – Main obvious difference of the Mark III was its four-speed gearbox, which was now footchange. Actually, the engine was more or less a side valve version of the new ohv Valiant, which had a stronger crankshaft. The Mark III became a firm favourite with the police.

1960 Velecotte Viceroy
A completely different engine to the others, being a 248cc two-stroke, though still a horizontally opposed twin, the Viceroy – though not a bad machine – was an expensive failure, a case of the wrong machine, at the wrong time. By the time it was launched in 1960, the intended market had gone.

1962 Velocette LE Vogue
Launched in late 1962 and made until 1968, only 381 Vogues were ever produced. Basically a Mk III LE with bodywork by the Mitchenall Brothers, it looked the part (of the modern commuter) – but it still had the old side valve engine and was capable of no-more than 55mph.

Visit the Mortons Archive for more information and online search options concerning Velocettes, or speak to our archivist Jane Skayman on 01507 529423 with your requirements. Email enquiries@mortonsarchive.com