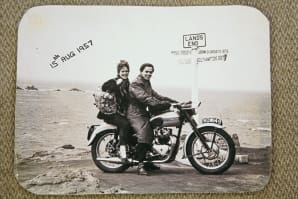 I didn’t regret selling the Tiger One-Ten at the time,” says Hampshire enthusiast Roy Houghton, speaking of the Triumph he’d bought new in 1956.

“I wanted a car so the bike had to go, it was as simple as that. Years later I was working at a car agency in America and thought it would be nice to have it back, but it took decades before I eventually managed to get it.”

The Triumph came from the motorcycle dealership pre-war racer Alec Bennett had set up in Southampton, and Roy was actually an apprentice on the car side of Bennett’s at the time.

That didn’t earn him a discount, though, and Roy still has the Hire Purchase document, with its hand-written entries showing the monthly payments leading up to final ownership.