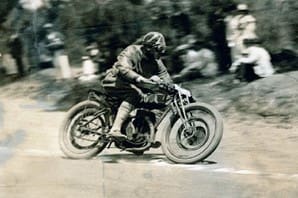 Classes were for 650cc (“No reason has been proffered by the promoters why the extraordinary limit of 650cc was fixed…” – that man again) and unlimited, while the races were handicap events too. Machines were not subject to regulations on silencing or equipment, so mudguards and the like were simply ‘junked.’

In the 650cc race, men on side valves – like R S Moore here, on his 492cc Sunbeam – were given a 20 minute start over the ohv campaigners, regardless of capacity, so as The Motor Cycle correspondent pointed out “…a 350cc ohv machine was given a 20 minute start in 200 miles to a 616cc (over-boring of 5% over capacity stated on the entry form was permitted… guess what The Motor Cycle’s man thought!) side valve, which does seem rather extreme.”

So no surprise there was a side valve winner – L E Hammerton on his Indian Scout (stated capacity 596cc) beating our pictured man Moore, with third the leading
ohv, Loader’s Norton.

In the unlimited class, side valves were given a six minute start over the 240 miles – du Toit’s 989cc Harley beat Gill’s similar machine, with Paton’s 998cc Indian third and fourth a familiar name Fritz Zurcher (see The Classic Motorcycle Douglas story, February 2013), on a 350cc ohv Douglas. Though in that race too, Moore didn’t feature in the results, a seized inlet valve stopping him – before physical exhaustion did, one imagines!