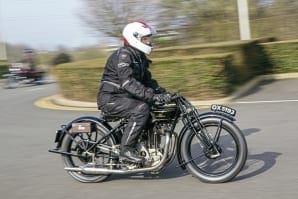 Have you ever been to a museum and wanted to ‘have a go’ on the exhibits? Now, the National Motorcycle Museum has decided to allow that to happen.

Trying times
Nottingham man Clive Osman had come along to sample the older machines, though he wasn’t a complete novice to the game, having ridden a couple of veterans before. He’s pictured on the Sunbeam Model 90.
Ever since it opened, and like practically every other museum, the National Motorcycle Museum (NMM) has been the subject of snide comments and jibes about the fact it is just too ‘static.’

And although in recent years efforts have been taken to rectify that perception, this latest idea might just be the best one yet to put that complaint firmly to bed.

The NMM has, for several years, been taking its motorcycles out and about, with many of the racers being given regular exercise, often with riders who were acquainted with them in their respective competition days. But it’s not so easy with road going machines – or is it?