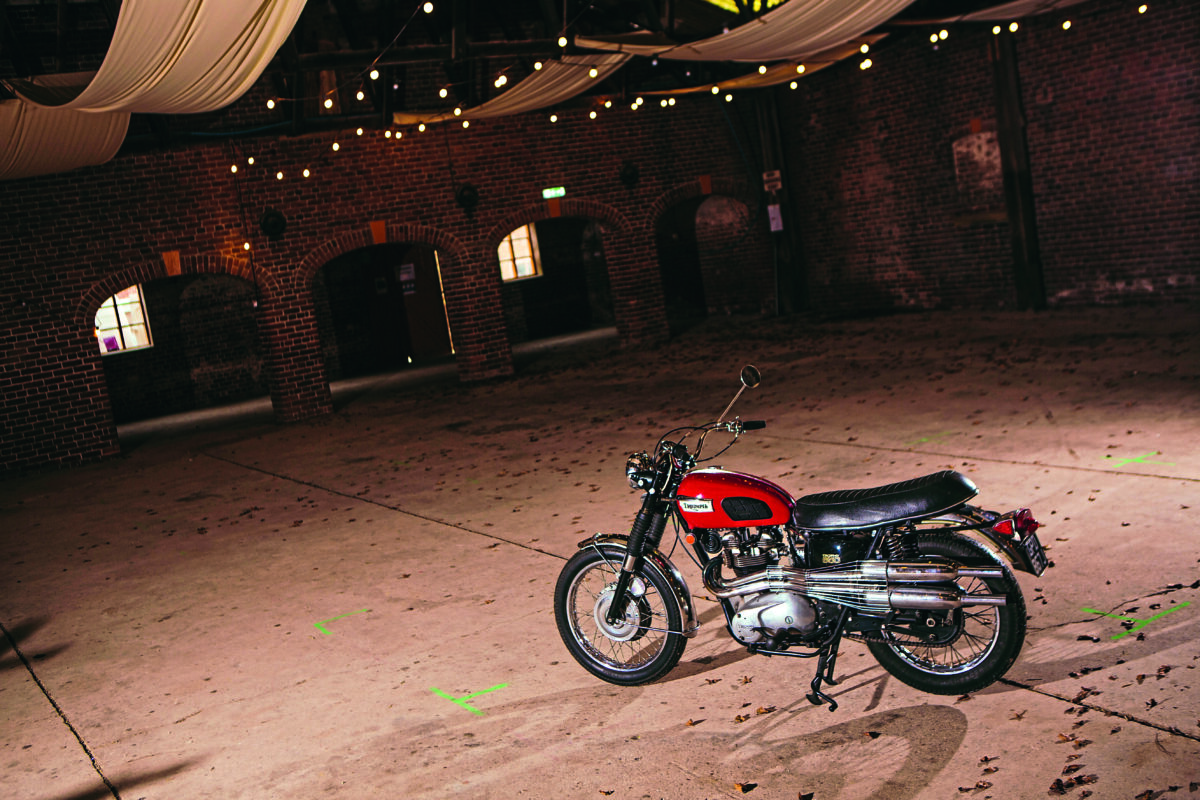 What’s the ideal old motorcycle? Of course, everyone has their opinion – but Triumph’s TR6 makes a strong case for the crown.

Famous name – check. Good looks – check. All-round capability – check. Reasonably priced – check. The Triumph TR6 has a lot going for it, as exampled by this one, which was sold a few months ago by Yorkshire-based auctioneer Dee, Atkinson & Harrison at one of their Driffield sales, which have brought motorcycle auctions back to that part of the country following the demise of the Bonhams’ Harrogate sale.

This particular TR6 (which was a UK only, not reimported, one) realised £6400, which, says the general consensus, was an utterly fair price; a good, fair deal for the vendor and the seller too, right ‘on the money’ and leaving all parties happy.

It was a ‘good one’ too, with matching engine and frame numbers, and possessed of full history, built
on September 8-9, 1970, and dispatched on September 17 to Comerfords of Surrey. It wasn’t registered for the road until June 25, 1971, so one assumes it took a while to sell. MoTs from 1971 onwards show it was used in Eastbourne in Sussex until 1986 when the mileage was recorded as 25,460. The next MoT was in 1999 and in Worthing – and the mileage had dropped to 1220… presumably, it was restored in that period and the speedo replaced.

In 2003 it moved to Yorkshire before being acquired by the man who was selling it in 2006 and was used sparingly over the last number of years.

It remained in lovely condition, though the vendor had changed the rear sprocket to raise the gearing (but the original was with it), had electronic ignition, a sheaf of MoTs and a VMCC dating document.

The Triumph TR/Trophy name had its origins in the early days after the Second World War, the first TR5 famously using the ‘square’ alloy barrel, as used on generator sets during the recent hostilities. The off-road competition TR5 and the road racing Grand Prix both shared this distinctive, square item, launched in 1948 and 1947 respectively.

The initial TR5 Trophy was of 500cc, and, as with off-road machines of its time, sported a rigid frame – though a shorter frame than was on the contemporary road machines. In fact, the initial frame had its origins in the 1940 350cc 3TWD twin, made for the British Army. Some were supplied, but the flattening of Triumph’s factory by bombing in 1940 destroyed most of them, though a version of the machine went into postwar production as the 3T. Seeking a machine to use as motorcycle competition returned with the peace, a modified 3T found success. But though it excelled in one-day competition, it was underpowered for events such as the International Six Days Trial (ISDT).

At the 1948 ISDT, the Triumph men used – and did well on – modified 500cc Speed Twins, one of the biggest changes being the adoption of the ‘generator’ alloy cylinder barrel and head. There were also trials mudguards, handlebars and a smaller petrol tank.

The three Triumph men (Jim Alves, Allan Jefferies and Bert Gaymer) all won gold medals at the event in Italy.

In late 1948, the TR5 Trophy production model was launched at the motorcycle show, sporting a frame more akin to the one-day 3T derived machine, with the Speed Twin engine, using the aluminium top end. It was an instant and immediate success – and perhaps one of the most handsome motorcycles of any era.

Production started in early 1949 and as well as excelling in events like the ISDT, it gained huge favour in American enduro-type events. There was little change, really, until 1955 when it gained a swinging-arm frame and then, in answer to the demands from across the Atlantic, came the 650cc version, called the ‘Trophy-bird’ (Trophy crossed with Thunderbird, though actually the Tiger 110 provided the engine), in the US. It was an instant success, excelling in Stateside desert racing; indeed, by the mid-to-late 1950s, unless one was so-mounted there was little chance of success.

In keeping with the Triumph range, the twin downtube frame was adopted in 1960 and then in 1963 came unit construction, and new single downtube frame. By now there were various models – the ‘standard’ (UK) TR6, plus TR6C, TR6SC and TR6SR. Gradually, the TR6 lost its individual (competition-biased) identity and effectively became a single carburettor version of the Bonneville, even down to using the same camshafts and pistons.

During the 1960s there were more variants (in 1966 engine number prefixes started TR6, TR6R, TR6SR, TR6SS, TR6C, TR6SC) though numbers gradually came down, while in 1969 sales literature. ‘Trophy’ was replaced by ‘Tiger’ though it was essentially the same model. For 1971 there was a sea-change, with the adoption of the oil-in-frame arrangement, then from 1973 the 750cc TR7. In 1983, the last of the ‘original’ TR series rolled off the production line.

‘Ruby red’ was the name of the attractive colour used in 1970, which looks well on the machine pictured. Perhaps it hasn’t the glamour of the Bonnie, but as an all-rounder, the TR6 (whether called a Trophy or a Tiger) is a superb choice.