The Goodwood Revival meeting, held annually in September has become nothing less than a phenomenon. Scores of historic cars from the 1920s (and earlier) through to the 1970s do battle on the racetrack, which is contained within the estate owned by the Earl of March.

Participating drivers and mechanics are encouraged to dress in a ‘sympathetic’ manner, while huge attention to detail is paid by the organisers to ensure a period  ‘feel’ is recreated. Spectators get in on the act as well, with the majority ‘dressing the part.’ Motorcycles have always been part of the show, with Barry Sheene among the most vociferous and high profile supporters of the motorcycle race in early days. Indeed, the riders now race for the Barry Sheene Memorial Trophy. 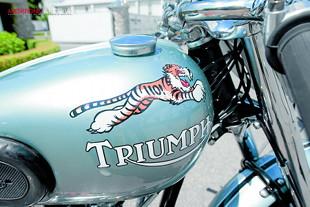 Traditionally, the Goodwood motorcycle races have been for Manx Nortons, Matchless G50s and such like – in Sheene’s days, he more often than not Triumphed, generally on one of Fred Walmsley’s Manx Nortons. Gradually, more and more star names were attracted, with among those who’ve appeared in recent years Wayne Gardner (who’s taken over Sheene’s mantle as most often the winner), Freddie Spencer (both back this year), Jim Redman, Steve Parrish and virtually the whole of the British Superbike grid.

In 2008, a decision was made to try a slightly different formula and encourage machines of the generation before the Manx/G50 era – which was actually the time when Goodwood operated as a race track for motorcycles. To this end, a different type of machine was encouraged – it was more BSA Gold Stars, Triumphs, Dominators, Velocettes, Vincents and such like, less G50s and Featherbed Manx Nortons. There was also the introduction of two-rider teams, with a ‘professional’ and an ‘amateur’, normally the owner. 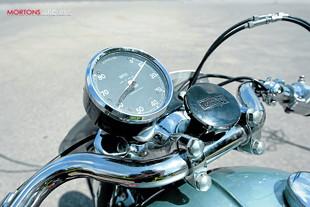 Goodwood reverted back to the previous pre-1966 rules for 2009, though with two riders per machine, with Gardner, partnered by John Leigh-Pemberton, winning from Michaels Russell and Rutter but for 2010 it’s back to the earlier class. This has attracted some different entries – among them south London based businesses Ace Classics and The Baron Speed Shop. Ace Classic may be familiar to many readers – the shop, based in South-east London is long-established and a well known name, with decades of pre-unit Triumph experience. The Baron’s Speed Shop is perhaps less well known, though some readers may remember the fabulous pre-unit bobber built by them and featured in (and on the cover of) our November 2007 issue.

The two men behind this project are Ace shop manager Kev Rushworth and The Baron Speed Shop’s Dick Smith, who for 10 years has worked for Ace Classics, and still does three days a week with them. They have collaborated and between them built the rather snazzy Triumph you see before you. 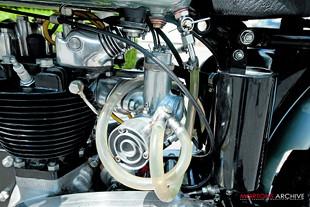 Kev explains; “It’s based on a 1954 Triumph Tiger 110, the first of the swinging arm ones, with the single downtube frames. Dick has carried out quite a lot of mods to the frame, basically stiffening it up and bracing the swinging arm.”

“It has twin carbs, mounted on a Webco manifold – Webco was an American aftermarket parts company in the 50s. We’ve aimed to build a bike that looks like a Johnson Motors (JoMo) racer from the period, hence all the chrome and the Tiger motifs. Everything on the bike, we now stock, so it’s a rolling advert really, for Ace Classics and the Baron Speed Shop.”

“The forks are braced, Triumph GP style, while racing shots of the time often show Triumphs like this one with that modification. “Shrouds are Triumph GP too, as is the rev counter mounting bracket. The handlebars are rigid bars, turned upside down, while the front hub is the 1954 pie-crust one, used for one year only. The one gallon oil tank was part of the factory race kit, likewise the rear-sets – Ace Classics can supply all the bits used to customers now for swinging arm and rigid machines. We’re also going to be making the Feridax-style racing seats.” 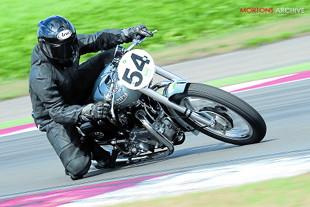 Dick elaborates on what’s been done to the engine; “The twin carbs are Amal 389s, 1 3⁄16in size. The iron head is Tiger 110, though I’ve modified it with a few secret tricks I’ve learnt over the years. The valves are Nucleus. It’s running twin plug heads, another period mod.

“Barrels are standard 650cc eight-stud with the pistons an original set of MC Cycle Supply forged pistons which give a 9:1 compression ratio. The bottom end has a two-piece (three including the flywheel) crankshaft assembly, extensively lightened, with R&R billet rods and the crank balanced at 85 per cent.

Dick goes on; “We’re using a four-speed close ratio gearbox, while the multi-plate clutch runs in an aluminium basket. Goodwood’s organisers’ are very specific about what is and isn’t allowed; for example we’re using a magneto ignition and chain primary drive, as stipulated. We could also easily make it 750cc but machines have to run at the size they were originally supplied, hence we’re at 650cc.”

Kev will be riding at Goodwood and although he hasn’t ever ridden in a race before, he has done track days since he was 18 – he’s now 30 – so has lots of track experience. He said; “I went to Goodwood in 2008 and was inspired. I just wanted to have a go. It’s taken us an awful lot of work to get this far, with lots of correspondence with Goodwood. Now we just want to give a good account of ourselves and finish the races.” So far, the duo don’t know who their ‘professional’ rider will be, with Goodwood leaving it quite late to decide.

Whoever gets the opportunity, Kev reports that they’ll find the handling is pretty good; “I’ve done a few track days on it and can ride around the outside of some of the ‘moderns’. It’s got Avon GP tyres on it, which seem to suit, plus our rolling chassis mods work well too.” 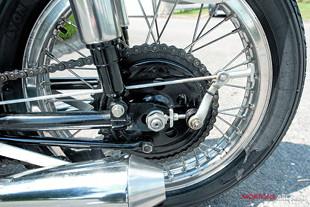 Talking about what they may do with the Triumph post Goodwood, both Kev and Dick are keen to race it more – and also develop it some more too. Kev; “I fancy doing some VMCC racing, so that’s perhaps what we’ll do.” Dick expands; “There’s a few mods we could do, like running it as a 750, using a different ignition, different primary drive…all things we could do if we were racing it in a different series. We’ll see.”

Whatever becomes of this Ace/Baron Triumph, it’s certainly an eye catching piece of kit, retaining a period look while, hopefully, being able to cut it on the race track. We’ll be reporting from the pits on how the Revival goes.