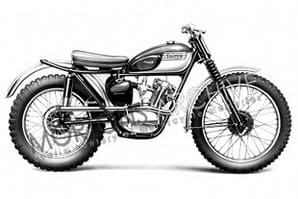 The first 150cc Terrier was delivered in 1953, the Tiger Cub coming the next year. The first year ones had a high-level exhaust pipe, interestingly, though that was short lived. What wasn’t short lived though was an obvious and explicit link between the Triumph ‘babies’ and the bigger models in the range; the Terrier was amaranth red, a la the Speed twin, with the Cub finish echoing Tigers 100 and 110.

Over the years, there were a dizzying amount of Cub variants, with French Army and Bermudan among the stranger ones, alongside the more expected ‘competition’ jobs; trials and scrambles were both listed, while in the States many were converted to long, short and dirt track spec. They were used for road racing too, and even record breaking.

The Cub has remained a model that’s well loved, its ‘cheeky charm’ undimmed by the passing of time. For whatever reason, they were a ‘cute’ model which always raised a smile – and still do today.

1955 Triumph Tiger Cub T20
One year on from launch, the high-level pipe has been replaced though there were still 19in rims front and rear. Essentially, the Cub was just a bored (63 from 57mm) and stroked (64, up from 58.5mm) Terrier, with different mudguards and paint finish.

1958 Triumph Tiger Cub T20
The swinging arm actually debuted in 1957, with the most notable 1958 differences the mouth organ tank badges and the deeply valanced rear mudguard. The 16in rims had come in 1956 on the plunger framed version.

1962 TS20 Cub Scrambler
The competition potential of the Cub was examined early on, with many finding favour with trials riders in particular, though others were used on the dirt tracks in the US and there was the rarest of all Cubs, the Scramblers – less than 400 were built.

1962 Triumph Tiger Cub T20SH (Sports Home)
Based on the SL (Scrambler Lights) and SS (Street Scrambler) versions the SH bowed to British sensibilities with low handlebars, and fitted with a 9:1 compression ratio piston, R cam and close ratio gears. A large Monobloc carb’ was fitted too.

1963 Triumph Tiger Cub T20
The side-points engine made its bow in August 1962, with the partial rear enclosure having been implemented for 1959. This was essentially the standard ‘whole’ Triumph Tiger Cub’s final incarnation, running through to 1965.

Visit the Mortons Archive for more information and online search options concerning Triumphs, or speak to our archivist Jane Skayman on 01507 529423 with your requirements. Email enquiries@mortonsarchive.com