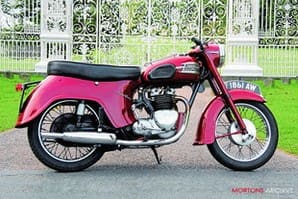 Physical landmarks have traditionally been the most obvious measures of progress and the Triumph Speed Twin is one of these, having influenced motorcycle engineering throughout four decades. The owner of this example, Geoff Pearce, was born two years before the launch of the original model in 1938, yet the 1962 version he now rides is the first twin-cylinder machine he has owned.

“I’ve always been a fan of singles,” Geoff explains, “but at my age a twin is easier to kick over.” In fact, he is not a man to effect change for its own sake, having lived in the same village street near Wrexham for 40 years, most of which were spent working at Cadbury’s chocolate factory in Chirk, while staying true to a love of bikes that began in childhood. 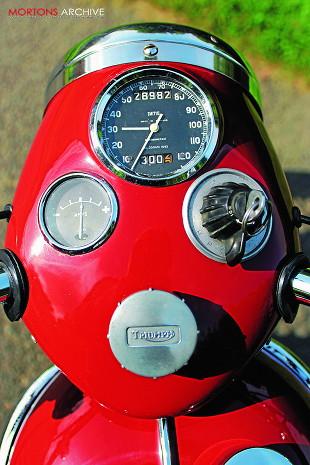 Now aged 73, Geoff recalls the day, some 25 years ago, that he followed up a conversation at his local Triumph dealer, Meredith’s of Shrewsbury. The rumour of an old bike in a barn led him to a local smallholding, where he found a derelict structure with the roof fallen in over a large lump, covered in mouldy carpets.

“I knew that this would be a real challenge!” he says. “Even before I uncovered it all, I knew everything would be pretty rusty, since the old matting would have retained layers of damp. But it was a lot worse than that – parts were here, there and everywhere, all broken and smashed up. I almost turned around and left it all there.”

The Triumph had been used as a field bike, stripped to the bare minimum and ridden until it was beyond use. Geoff paid the owner a nominal sum and took the pile of loose parts home in the boot of his car, making three runs in all. The front mudguard and rear enclosure were rotten through in several places, but almost everything else appeared to be present, so he stored the collection of rusty parts at the back of his garage and waited for a rainy day before beginning work on the restoration.

Despite his love of singles, Geoff felt great respect for the twin-cylinder machine he had rescued. “I always liked the Speed Twin for the simple reason that, in the early 60s, it was the best overall performer. I think that’s why the police used it as a patrol bike in this area. It was big and very fast, with something about it that seemed a cut above the opposition. I loved it, even though the styling took some getting used to at first.”

Triumph revised the Speed Twin’s style and engineering for the 1959 season, basing it on the 348cc model Twenty-One, the launch date of which two years previously had marked the 21st anniversary of the Triumph Engineering Company. 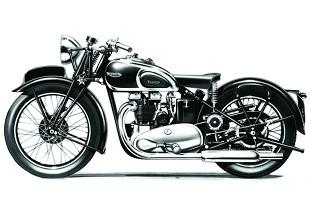 Enclosure had become increasingly fashionable during this decade of assaults upon the World Motorcycle Land Speed Record, including Johnny Allen’s successful run at Bonneville Salt Flats in 1956, and Allen’s ‘streamliner’ was the centrepiece of the Triumph stand at that year’s Earl’s Court show. Nevertheless, the combination of enclosed bodywork with the famous Speed Twin name divided opinions when the 5TA was unveiled in September 1958. Two steel panels, edge-ribbed for rigidity, hid the rear subframe as on the Twenty-One, while appearing to support a hinged dual seat. The bike’s front mudguard was given a graceful flare to balance the overall styling, which retained a traditional nacelle cover for the headlamp.

The 490cc 5TA motor was simply an over-bored version of the smaller engine, which now became known as the 3TA. It retained the layout of two separate camshafts, gear-driven from a forged 360-degree crankshaft, and was of unit construction, the inner wall of its left crankcase extending rearwards to form the inner primary cover, while the right crankcase incorporated a gearbox shell surmounted by a Lucas distributor. 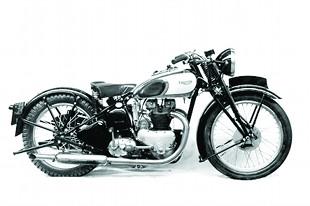 Despite a solid-looking profile, the new model’s insubstantial frame, smaller-diameter wheels and integral gearbox saved 35 pounds of weight over its 5T predecessor. There was good underseat access to electrical components and items in the toolkit, which were individually recessed into a rubber tray above the rear wheel. Nevertheless, although the new styling was a success in practical terms, it gave no performance benefit whatsoever. Furthermore, conservatively minded enthusiasts felt the bike’s bulbous rear panels and flared front mudguard owed too much of a fashion debt to the lightweight Tigress scooters, which were launched at the same time in a bid to enter new markets.

Geoff started his Triumph’s restoration by spraying the frame, which appeared to be still in alignment, with smooth Hammerite paint. “It’s a bit like building a house – you start with the foundation and then work up from there,” he says. He did all the assembly work himself, sending parts off to be shot-blasted, chromed, rebored or reground as necessary. “I’ve learned through experience that I don’t want to do a job twice if I can help it,” he says, “so I’ve paid good money for specialist work and I’ve had good results.”

Field bike antics had damaged the gearbox beyond repair, but memories of a friend who had bought a Twenty-One many years previously prompted an enquiry about what had become of the bike. “It’s up the top of the garden, in the nettles,” came the reply. Fortunately, the 3TA’s gears were in good condition and proved to be interchangeable. The most time-consuming part of the restoration involved refurbishing the front mudguard and rear ‘bathtub’ enclosure, as Geoff cleaned and brazed the rust holes, and then tin-soldered the edges until everything was smooth once more. 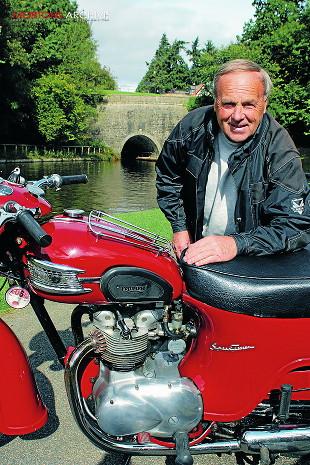 The largest physical landmark in Geoff’s neighbourhood was once Chirk aqueduct, constructed by Thomas Telford in 1801. Despite a height of 70 feet with 10 spans of 40 feet each, it was soon eclipsed by an adjacent railway viaduct; Scottish engineer Henry Robertson built this some 30 feet higher in 1848, to suggest supremacy of the new transport technology. Times have changed, but both canal boats and locomotives still cross the Ceiriog valley by means of these original bridges, proving that there is more to landmark design than speed or fashion.

The original 5T Speed Twin emerged at the top of its performance class in 1938. Twenty years later it had become eclipsed by other models, The Motor Cycle achieving a top speed of just over 85mph during a test of the 5TA early in 1959, so Triumph was committed to broadening its appeal.

An electric-start option was exhibited at the Earl’s Court show at the end of the year, intended for police fleet riders, who generally liked full enclosure. Triumph also offered a black-painted sports version, marketed as the T100A to replace the Tiger 100. But dealers in the USA had already began selling both the Twenty-One and Speed Twin in stripped-down form, following demands from private customers with conservative tastes and a desire to maximize outright speed.

The Tiger 100A was duly restyled for 1962 as the T100SS, with greatly abbreviated rear enclosure. Nevertheless, the only visible changes to the Speed Twin during the early years of its production were to the paint, which changed from traditional amaranth red to a brighter shade for 1960 and again to ruby red for 1962. A conjoined exhaust system replaced twin silencers for this year only, when the steering damper was permanently discarded along with the sheath covering the distributor, as the company sought to cut its production costs. 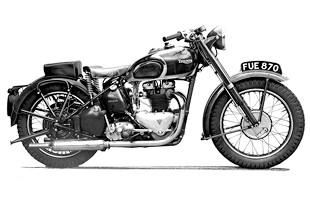 Triumph applied the T100SS’s partial rear enclosure and a conventional rear mudguard to a sports version of the 3TA, called the Tiger 90, and the 649cc 6T Thunderbird in late 1962. This new ‘bikini’ styling appeared on the Speed Twin for 1964. Paint finish became silver and black, and new front forks were fitted, while twin contact breakers, housed in the timing cover, replaced the distributor ignition. Motor Cycling ran one up to 90mph in January, but found the new forks less compliant than the old ones. The highly effective front mudguard went in 1965 and the fork internals were duly modified. Ultimately, just a single side panel to mirror the oil tank pressing adorned the final model, which was built up to 25 May 1966.

By now, big-bore 650s had set the performance standard, as the T120 Bonneville took the unit-construction twin-cylinder engine to a new level. The Speed Twin’s exit also marked the demise of Triumph’s distinctive headlamp nacelle, after nearly two decades as a feature of the postwar range. The mechanical similarities of its Tiger 100 replacement were a further tribute to the twin-cylinder engine originally designed by Edward Turner, who chose this moment to retire, aged 66, from the BSA board that now controlled Triumph policy.

I follow Geoff as he pilots the Speed Twin to Chirk aqueduct for a photo session, the bike earning a cheery wave from canal boat operators as they emerge from the quarter-mile long Darkie Tunnel. It’s a timeless scene and I try to imagine the reaction of Roy Evans, the bike’s first owner, when he took delivery on 7 August 1962. Was the new Triumph too fast, too flash or just too expensive to run? In any event, the registration book records that he sold it after just one week to another Oswestry resident, after which it remained in local ownership with the last written-in change of keeper occurring in May 1977. 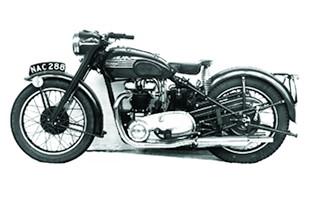 Personal misgivings about the styling aside, my ride on the bike confirms that it feels comfortable, lively and smooth; in other words, exactly like a Triumph Speed Twin ought to. The seat is wide and deep, the riding position perfect for all-day touring and the poise so balanced that I can take my hands off the ’bars and steer it with my knees, as I explore the picturesque Vale of Llangollen. Compact and taut, with a delicate feel to the one-down and three-up gearbox, the bike has few vices and much to recommend it. Pausing by the ornate gates of Chirk Castle, it occurs to me the Speed Twin would have looked no less startling, parked in Oswestry’s town centre during the 1960s, than these baroque portals from 1719 do in their present parkland setting.

What of the ‘bathtub’ styling? It certainly divided opinions, but during the period when enclosure became fashionable, it proved a far more successful cosmetic exercise than that of the majority of Triumph’s competitors. In practical terms, it improved the Speed Twin in its dual roles of commuting and touring, without compromising its overall performance. With hindsight, the changed emphasis makes sense in the context of marketing the 650cc range as Triumph’s next generation of roadburners.

Geoff says his favourite Speed Twin attributes are the engine’s smoothness and a comfortable riding position. “I could go faster if I wanted to, but I don’t,” he says. “Instead I ride it regularly and enjoy every moment of it at my own pace.”