Well, there is one man who will be able to say whether or not the 1922 TT-type Riccy turns out to be a delightful super-sports roadster, and he is the 1984/5 Association of Pioneer Motor Cyclists (APMC) President, Ormonde Gurr, of Great Brickhill, Beds. Something of a specialist in four-valve Ricardos, Ormonde already had a stable of such models; those, though, are standard production machines, whereas his latest (pictured here) is a very different animal.

One of four works-prepared models for the 1922 Senior TT, it is believed to be that rid­den by the designer himself, Major Frank B. Halford. The other three riders that year were Walter Brandish, Fred Edmonds, and Reuben Harveyson.

Or to be strictly accurate, the engine is a genuine 1922 Senior TT job (it was pre­viously in the collection of the late Bill Fruin, who had acquired it many years before, direct from the Triumph factory's own little museum), but the cycle parts are adapted Model SD. For the record, the engine is No.96527 TGH.

Triumph marque histories usually give credit for the design of the four-valver's upper works to Harry Ricardo, an acknow­ledged expert in cylinder-head gas-flowing. However, in the 1920/1 period Ricardo was occupied with establishing his new base at Shoreham, leaving Frank Halford to handle matters at his London design office. In a letter (dated October 12th, 1970) to Bob Thomas, owner of the four-in-line Vauxhall motor cycle, Harry Ricardo certainly confirmed that the Vauxhall was entirely Halford's res­ponsibility, adding "For the time being we had to make do with two drawing offices, one in London over which Halford presided, and the other in our newly-built premises at Shoreham under my immediate direction."

Moreover, Ormonde Gurr possesses a whole sheaf of drawings relating to the four-valve Triumph, and various other Triumph projects, and these are all stamped with the Ricardo company's London address, from which it is clear that much of Triumph's design work of the early 1920s was under Frank Halford's direction.

The main difference between the works racing engine, and those of the production roadsters, is that the racer has dry-sump oil­ing whereas the roadsters used a hand-pump total-loss system. Also, for the 1922 racing season splayed, instead of parallel, exhaust ports were adopted and a side instead of vertical sparking plug position was specified (for reasons of accessibility). The central plug position was being retained as an alternative.

To allow for a 25 per cent increase in valve area the cylinder bore was enlarged in diameter from 80.9 to 85mm, while at the same time the stroke was shortened from 97 to 88mm. The piston was a light-alloy slip­per, drilled for lightness. Cams were smaller than previously, but for greater reliability were made wider. Upstairs, the rocker mechanism had been beefed-up con­siderably. The compression ratio was a very modest 5¼ to 1, though this could be increased if required by removing the com­pression plate from under the cylinder barrel. Power output was said to be 18bhp at 5,000rpm, which may not sound much in a present-day TT context, but which was sufficient to propel the 1922 racer at 80mph, or so.

Transmission, too, had been redesigned during the winter, and instead of the previous year's two-speed gearbox there was now a three-speed, so compact that the gearbox was the same size as before. Clutch area was increased, and a conventional thrust rod up the centre of the mainshaft had replaced the earlier external withdrawal mechanism.

The new dry-sump lubrication system was worked by a twin piston oscillating pump driven off the inlet half-time wheel, forcing oil into the drilled crankshaft through an arrangement of ducts and washers; the big-end bearing was supplied under pressure, the excess oil splashing on to the cylinder wall. It then drained to the base of the crankcase ( a flywheel clearance of% toys inches eliminated the possibility of oil drag) where it was sucked out via a hollow crankcase bolt and returned to the top of the oil tank. The scavenge side of the oil pump served also as a crankcase pressure release. 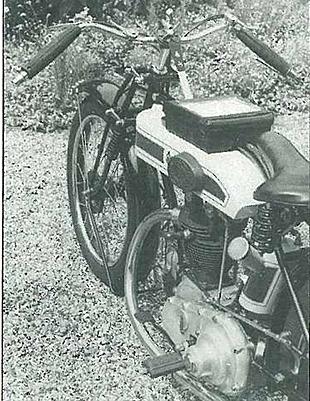 Brakes were rather primitive, with a vee­block operating in a dummy brake rim on the rear wheel, while the front brake — and maybe that should be in inverted commas! ­was the infamous arrangement of an open pulley throttled by a Ferodo rope, as featured on the early-type Model P roadster. Still, Frank Halford must have thought highly of the system, for he had employed it on his 500cc One-Hour record breaker; but of course, when you are circulating Brooklands you don't need good brakes, anyway!

In the 1922 Senior TT, Triumph's front­runner was to be 21-year-old Walter Brandish, and Walter certainly did his best. He led for a while, but then second gear disappeared after the third lap, and he rode brilliantly to finish a very good runner-up. "At least I had no worries about the oiling system," he re­ported, in the finishers' enclosure.

Of the other three works men Frank Halford finished 13th, but Fred Edmonds broke off a handlebar when he dropped the machine at Union Mills on the second lap when lying fourth, and Reuben Harveyson had to retire at Crosby with a stuck valve, a lap later.

Ormonde Gurr understands that the Triumph works built 24 of the dry-sump racing Riccys but they were never sold to the public, and most were shipped out to Australia. In building his machine to as-near-as-possible 1922 condition, he had the welcome advice of former Triumph works rider Wilmot Evans, who told him that the original race gearbox had been sold years before to some­body in Douglas who was now long dead and buried. But no Manxman ever throws any­thing away, so there is a good chance that the box is still on the Island . . . somewhere.

One other 1922 works racer (or much of it, anyway) survives in Perth, Western Australia, in the hands of Eric Langton; sadly, however, Eric's engine has a badly-smashed crankcase.

The original big-end bearing of Ormonde's model had suffered some catastrophe ("It is a double-row caged roller bearing," he explains "and the original cage was lying in bits in the bottom of the crankcase.") However, he manufactured a new big-end, cage and all, and a daunting job it was, too! Also manufactured by Ormonde is the oil tank, fabricated from copper sheet and with the oil-filler neck on the left — because the TT pits are on the left-hand side of Glencrutchery Road, of course. In this, as in so many other details, he worked from photographs and sketches as published in the contemporary press. 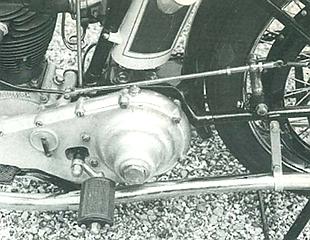 "I had to modify a standard Triumph frame, and if I had known then what I know now, I would have moved the engine further forward. On roadster Ricardos the rear brake pedal is pivoted ahead of the primary chaincase, but on the racer the foot­rest hanger comes through an aperture in the primary chaincase, the brake pedal pivot is below the footrest, and there is a bell-crank linkage secured to the rear face of the chain-case inner half." All this — including making a slot in the chaincase and fabricating the bell-crank linkage — was done by Ormonde. He was, he says, extraordinarily lucky to come across a remote-needle Amac racing car­burettor, of exactly the right type for the machine.

There was no point in using parts from a road-going Ricardo to complete the racer project because, as Ormonde points out, har­dly a bolt is interchangeable between the two, anyway. But do please note the fuel tank, with the rounded-front side panels which were correct for the 1922 Senior TT Models, but which didn't come into use on roadster Triumphs until 1926/7. The leather case atop the tank is correct to 1922 TT spec­ification, too. So is the friction-type steering damper. Reg Mills was responsible for rebuilding the wheels, using new rims.

The ex-Frank Halford 1922 Ricardo has been a long time a-building, but that wasn't really Ormonde Gun's fault. "Bill Fruin got the engine twelve years ago," he says "but Bill himself didn't really know what it was. He promised that I should have it, but time went on, and then he died and the collection was sold-up, and I had to buy the engine, otherwise it would all have been done a dozen years back." It should be done by now, though. At the time of our call the front brake had yet to be completed but, that apart, the ex-works Riccy was ready to start winning Show awards. You can be darned sure it'll do that!