Code-named T100T, it is the Daytona Tiger, directly evolved from the machine which took Buddy Elmore to victory in America's gruelling 200-mile classic race this year. Racing know-how benefits other models, too, for the new frame of the Daytona Tiger is employed also for the existing single-carburettor 349 cc Tiger 90 and 490 cc Tiger 100 models.

Up among the six-fifties, the TR6 Trophy steps out to claim a bigger share of the limelight, with a boost in performance yet no loss of lower-end flexibility. For both the Trophy and the magnificent Bonneville there is a redesigned oil pump with increased scavenge capacity.

Trim and smart in a coat of blue and white, the popular little 199 cc Tiger Cub speeds on into the new season in its present form. Smallest Triumph of all, the 99 cc T10 Automatic scooter blossoms out in a choice of two duo-tone colour schemes, or the familiar flamboyant red. 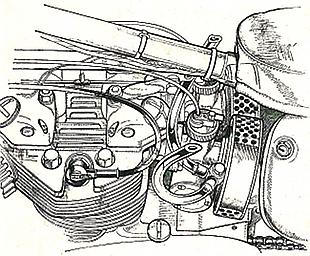 Down has come the chopper on three long-established tourers (349 cc Twenty-One, 490 cc Speed Twin and 649 cc Thunderbird) and with them vanishes_ the nacelle headlamp once a characteristic of the marque. From now on, every Triumph has the bracket-mounted headlamp.

Improvements affecting all twin-cylinder models include transfer of the lighting switch from the left side panel to the headlamp body, a restyled dualseat, new and louder horn and a gear-box mainshaft redesign.

New feature is a cylindrical Wilmot-Breeden steering-head lock built into the fork crown.

Exhaust valves are the same size as those used in the Tiger 100, but are made in steel with a higher heat resistance performance.

Then there's the cylinder head, fed by two 1 1/16-in-choke Amal Monobloc carburettors on slightly splayed inlet stubs Both carburettors are supplied from the float chamber of the left-hand instrument. Compression ratio is 9 to 1.

With the new C-range frame, the steering geometry of the latest Daytona Tiger, Tiger 90 and Tiger 100 comes into line with that of the six-fifties.

It has a new steering-head lug giving a 3-degree reduction in head angle; at the same time, rear-end rigidity is enhanced by bracing the fork pivot to plates welded to the rear sub-frame assembly.

Moreover, seat height and centre of gravity are brought down by in to give better stability, and the frame comes out at 2 lb lighter than the one it replaces.

Topping the frame is the new sports seat. It is slimmer at the nose, slightly raised at the rear and with attractive transverse ribbing. For both the Daytona Tiger and Tiger 100, the colour scheme is Pacific blue and Alaskan white. Distinguishing scheme for the Tiger 90 is hi-fi scarlet and white. 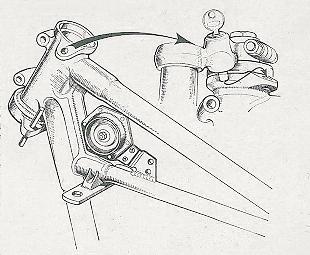 Applicable to the C-range trio and also to the pair of 649 cc models is a gearbox revision. Principally, this brings mainshaft spline profiles into conformity with British Standard Specification. At the same time the opportunity has been taken of mounting the clutch hub more securely on the mainshaft.

An extended threaded section on the end of the shaft permits use of an aircraft-type locknut, in place of the original plain nut and tab washer. The new shaft can only be used in earlier gear boxes if new pinions, too, are fitted.

Queen of the Meriden range, the twin-carburettor 649 cc Bonneville shares the general Triumph modifications, and greets 1967 in an eye-catching livery of aubergine and white. Aubergine? That's a rich, and very regal-looking purple. First, though, comes the TR6 Trophy—and this is a very different Trophy from its predecessors.

Exhaust valves
The single carburettor is retained, but the specification now includes Bonneville exhaust valves and exhaust camshaft, tappets with 1 1/8in-radius feet, and inlet valves increased in size to 1 19/32in-diameter. Yet the inlet camshaft has 'soft' contours. An unusual formula? Sure is! But it is the one which swept the police-type Saint to world-wide renown.

That's just it-the 1967 Trophy is virtually a plainclothes cop, able to tank along at 25 mph in top gear yet with rocketing acceleration all the way from there up to three figures. Indeed, an amazing performance.

Baby of the motor-cycle range, the 199 cc Tiger Cub has endeared itself to many thousands of riders. Low in first cost, hard-working yet cheap to run, it will endear itself to thousands more; the under-200 cc capacity, attracting a lower insurance rate, is only one of the points in its favour.

Lightweight singles, powerful twins-but Triumphs are active in the scooter world, too. The name is carried by the 99 cc T10 Automatic, a machine unmatched for simplicity of operation. How simple? Just a throttle to make it go and brakes to stop it! 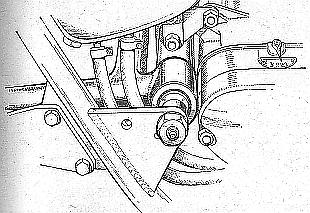 No clutch lever or gear pedal to worry about, for the drive to the rear wheel is by a sophisticated system (governed by engine and road speed) which pretty nearly thinks for itself.

There's even an inbuilt safety switch operated by the rider's weight. The T10 can be started in the normal way, but unless the rider is properly aboard and ready to roll, it won't budge an inch.

As before, the scooter comes in a finish of translucent ruby, but now there are two alternative two-tone schemes, of either mimosa and ivory, or blue and ivory. There's a bodywork modification, too; previously of one-piece design, the weathershield panels are now individually replaceable. Advantage to the owner is cheaper repair bills should the T10 suffer a bump.