Many who frequent the classic shows will recognise Graham Bowen, as for years now he’s been one of the UK’s top restorers, with Triumphs his speciality, in particular the pre oil-in-frame unit construction models, made from 1963 to 1971. Graham has restored plenty of versions and variants but few can have been more handsome than this US specification 1969 Bonneville T120R.

Graham, who passed his motorcycle test in 1965, simply explains why he restored this particular year and specification with the statement: “I like the colour.” And it’s an easy colour to like, and with the usual high Bowen standard paintwork it really is a crowd-stopping, attention grabbing motorcycle. Of course, Bonnies came in all manner of colours and finishes but this ‘Olympic Flame’ and silver combination takes some beating.

The restoration of this machine, bought in 2005, took Graham approximately two years and he praised three sources of parts and help: “Mark Francis parts supply, Hughie Hancox question time and Derek Gothard for taking the mickey…” Derek is, of course, a renowned BSA restorer and Graham and he enjoy a jovial relationship, full of banter about choice of machine of each. It’s all good natured but they do like to outdo one another, and while both Graham and Derek take the pursuit of perfection for their motorcycles very seriously indeed, they don’t take themselves too seriously.

Graham, a builder from Rayleigh in Essex, explains that for him, it’s attention to detail that makes a restoration. To this end, notice the Florida number plate on the Bonnie, which is just that added little touch that elevates it to a higher level. Graham also says, when restoring, “Don’t count the cost…” To that end, when asked if he dare put a cost on the Triumph T120R’s restoration, the answer is an emphatic “No”. 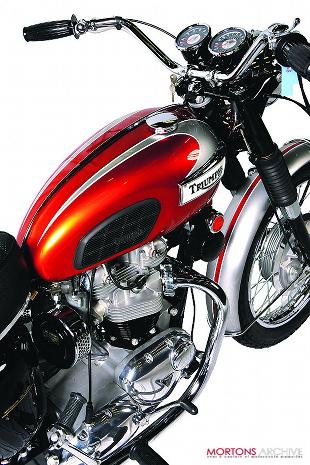 By 1969, the Bonneville was a well-established model, having now been in the Triumph range for 10 seasons. The 1969 season version had a few differences to the 1968 model, primarily in terms of finish, while inside the engine, there was a heavier crankshaft flywheel and nitride-hardened camshafts. Also, a balance pipe between the two exhaust pipes was added, which crossed the frame up near the cylinder head. The Bonneville had by now, of course, gained Amal Concentric carburettors plus the twin-leading shoe front brake, both new additions for the 1968 model season.

‘T120R’ was how the US market Bonneville was coded – as opposed to the simple T120 moniker applied to UK machines. Differences between UK and US market variants were in truth few; a different sized fuel tank and handlebars was about all really; prior to 1969 US models had shorter silencers and no parcel grid but both of these items became UK-standard issue in 1969 too.

To many, the Bonneville was about at its peak in 1969; the 69 model has the TLS front brake and all the other refinements gradually introduced through the 1960s but it still boasts the attractive pre-OIF (oil in frame) chassis. And, if you sit and look at the pictures of Graham Bowen’s example, it’s hard not to think that this is undoubtedly one of the best looking motorcycles the classic world has to offer. A combination of style and substance – no wonder the Bonneville remains a classic favourite.