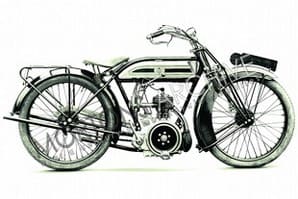 For Triumph, all the ‘famous’ models were really 500s or above, through the Model A, Model H, Ricardo, Speed Twin, Thunderbirds, Bonnevilles. None of them were in the 350cc class, a category that for many manufacturers was crucial, particularly in the immediate postwar period. While BSA sold its B31 in vast numbers, Triumph’s 3T ‘baby twin’ never enjoyed the popularity of the bigger ‘trumpets’. Later efforts were again overshadowed by bigger versions – but 350cc Triumphs represent a value for money entry into twin ownership, particularly.

Why were 350cc machines important?
A topic of discussion on our letters pages a few months ago, it most likely seems to have been a combination of insurance costs (a 350cc was way cheaper than a 500cc to insure, but often looked the same, with performance not too far lacking) and perception; mum and dad were more likely to act as HP guarantor for a ‘little’ 350 than a ‘big’ 500. Things like fuel economy came into it, too.

1923 Triumph 350 LS
The firm had traditionally built 500cc and above rugged and dependable machines, some still had belt drive – the unit-construction, outside flywheel machine, with gear driven primary drive, was an absolute break from what had gone before. Few, though, were made.

1949 Triumph 3T
Not just a 500cc Speed Twin/Tiger 100 with revised engine dimensions, the 3T engine – though looking similar – was based on a separate, wartime design. Additionally, the frame was slightly smaller (and lighter) though gearbox and forks were shared with the bigger model.

1957 Triumph Twenty-One
The 3T had been dropped in 1951 and it was six years before another 350cc machine appeared, the all-new unit construction 3TA or Twenty-One. An important model for many reasons; basically, in terms of engine design, it set the blueprint for models like the Tiger 90 – and 500cc jobs – followed.

1971 Triumph Bandit SS350
It could have – nay, should have – been a genuine threat to the Japanese. A genuinely all-new Triumph design, it’s what the future should have been; penned by Edward Turner initially, it was refined into the handsome machine before you. Yet another case of what should/could have been – though ideally launched in c1965…