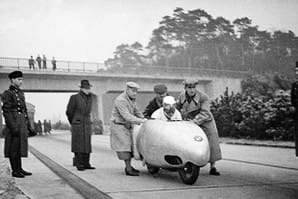 BSA submitted its new 500cc side valve, the Val Page designed M20, for British Military MEE (Mechanisation Experimental Establishment) assessment at Farnborough, Hampshire. The test concluded that the model needed a major overhaul, causing the MEE to describe its reliability as ‘fair’ while considering it not entirely suitable for military service.

BSA delivered three more M20s to the MEE on October 19, 1937, and a month later the military issued a demand for these three side valve 500cc singles (registrations HMP 803, 804 and 805) on November 13, 1937, at a cost of £47 each. Two machines were destined for the MEE’s standard 10,000 mile test while the third went into service. Despite BSA’s improvements, the MEE wasn’t entirely happy with the M20 but did eventually recommend it for service, with the first demand for 398 machines issued eight months later.

BSA modified the M20 and circa 120,000 were delivered over the war years – staggering numbers considering how bleak things looked for BSA and the M20 as the demand was issued in November 1937 for the three further test models.