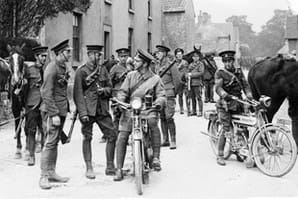 Of advanced design and intended for sidecar work, the new V-twin was powered by a 6hp side valve JAP engine, with two-speed countershaft gearbox.

In its issue published on May 29, The Motor Cycle carried a brief feature (and picture) entitled ‘Motor Cyclists and the Army’, leading with: “Under the terms of a Special Army Order dated May 20, 1913, the motorcyclists required for the Signal Service of the Expeditionary Force are to be enlisted into the Royal Engineers, Special Reserve, Motor Cyclists Section, and on final approval will be promoted to corporal. This promotion carries with it the privileges of belonging to the sergeants’ mess of Royal Engineers units.”

Applications were invited from men aged 18-30 years who owned a motorcycle along with the necessary spare parts and clothing. The initial enlistment was for four years with options of further enlistments of two year terms until the applicants had reached 40 years of age.