May 1912
The MCC’s Member’s Hill Climb was held on a specially chosen hill nestled on the Chiltern range, with plenty of trees offering shade from the hot sun of a super early summer’s day. The hill was only revealed to competitors at the last minute; the climb rises instantly from level to a 1 in 5 gradient with two curves plus some cart ruts and an adverse camber to test riders.

Chairman of the organising committee despatched the first man as soon as officials were ready, then at safe intervals the rest of the field followed. On merit (handicap) J P Le Grand (2½hp Singer) took the lightweight class, E A Colliver (3½hp Zenith) the over 350cc single cylinder event and E B Ware (6hp Zenith) the under 1000cc multi cylinder class. On time, Chris Newsome (3½hp Rover) was quickest in the over 350cc single cylinder class with Sid Tessier (5hp BAT) making fastest time of the day and winning the multi cylinder under 1000cc class. Freddie Barnes (pictured above) with Peter Weatherilt were the sidecar class’s star turns, raising plumes of dust as they skidded round the bends closely followed by the pairings of Pratt/Cooper and Billy/Mrs Wells.

May 1937
Crystal Palace resounded to the roar of racing motorcycle engines for the first time for some years as an all star entry competed on the new two mile track at the South London venue. As a warm up, Eric Fernihough, fresh from his record breaking in Hungary, thrilled the crowds as he enthusiastically paraded his Brough Superior, the fastest two-wheeler in the world, round the circuit.

The 350cc Junior Grand Prix started promptly at 3pm with Maurice Cann, Harold Daniel (both Norton) and George Rowley (AJS) slugging it out for the lead but finishing in that order.

There was drama in the sidecar race as Jack Surtees’ 596cc Norton outfit hit the bank at the Stadium curve, tipping off driver and passenger, then bounced across the track and on to the grass verge, to take off the door of the secretary of the meeting’s car, before coming to a rest against the fire tender. Arthur Horton (596cc Norton) won the race.

Following this hectic excitement the 500cc solo race seemed almost an anticlimax although offered some close racing with Daniel taking the flag from Stanley Woods (495cc Velocette) with Jock West (Ariel) third. Cann’s ftd of 55.13mph, on his 348cc Norton was faster than the best time at the recent car meeting. 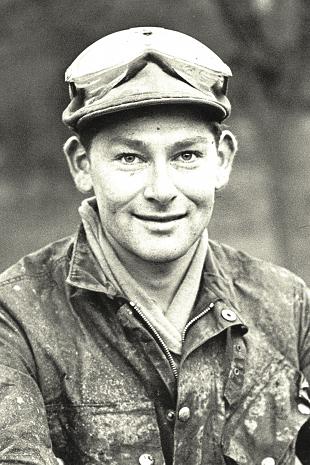 August 1962
After four attempts, two of which rewarded him with the runner-up spot, Sammy Miller (shown) won the Scottish Six Days Trial with a loss of just eight marks, 10 clear of arch rival Gordon Jackson (347cc AJS). Riding his ultra light 497cc Ariel GOV 132, Miller was clean after the first day, dropped a mark on Tuesday and remained on one until Friday, when he lost seven.

Although disc brakes have been tried before, Lambretta has become the first factory to fit a disc brake to a high quantity production roadster model with the announcement of the TV175 Slimstyle scooter. The brake is operated by cable and a combination of ball and roller thrust plates (one of each) pressing one disc pad on to a 175mm solid steel disc while the other which is adjustable is static.

Among the design’s virtues is a near absence of brake fade even after repeated hard use on a long descent or in heavy traffic. 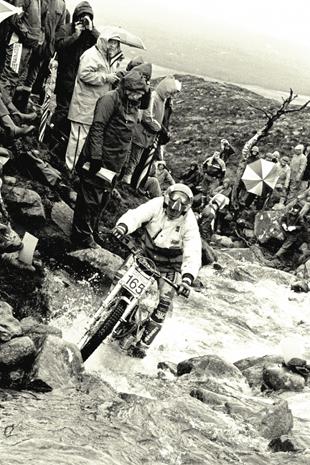 May 1987
On Saturday, May 2 a full entry of 140 riders assembled at Kinlochleven for the start of the 4th Edinburgh and District Club’s Scottish pre-65 trial. Front-runners of a quarter of a century ago including Sammy Miller, Dave Langston and Jim Sandiford rubbed shoulders with ‘younger’ classic enthusiasts, while veteran photographer Nick Nicholls was in hand to record the action.

The 28 mile course included observed sections at the Schoolhouse, Mamore and the Pipe Line which was cleaned by only one rider on the day, Dave Thorpe. And with only one clean sheet after the day’s sport, Thorpe, the organisers could give themselves a trophy as they’d hit the spot perfectly. Winner Dave Thorpe (199cc Triumph) 0 marks was followed home by Miller (497cc Ariel, three) with Willie Dalling (499cc Royal Enfield, four) taking the 500cc trophy. Jim Cunningham (343cc BSA) and Dave Younghusband (199cc Triumph) secured the 350 and 250cc cups respectively.

The following Monday 257 riders set off on the start of the annual Scottish Six Days Trial, from which an impressive 237 completed the 700+ mile event. Winner Jordi Tarres, 260cc Beta, pictured above, took the lead halfway through the week dropping 58 marks by the finish, with Steve Saunders (250cc Fantic) second losing 76 marks and Eddy Lejeune (250cc Honda) third on 81.