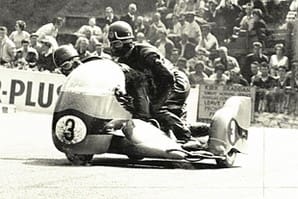 After practice it was clear the race would be between the BMWs of Florian Camathias and Max Deubel with Vincent a possible third, which was exactly how the race unfolded until Camathias hit the grass bank through Kerroomooar on lap two, handing the race to the German Deubel with Vincent second. Then Deubel’s engine seized at Ballig Bridge, leaving the Briton in the lead, his outfit powered by a highly developed roadster parallel twin BSA pushrod engine. Otto Kolle (BMW) and Colin Seeley (Matchless) were second and third.

Fabulous, incredible and all other superlatives are in use now at the first 50cc IoM TT. Ernst Degner (Suzuki) led the pack home with Luigi Taveri (Honda) second and Irishman Tommy Robb (Honda) third. Beryl Swain (Itom) became the first lady rider to compete in an IoM TT and was 22nd at 48.33mph.

Gary Hocking announces “I've finished racing” on returning to home after winning the IoM Senior TT. The likable 1961 350 and 500cc world champion from Southern Rhodesia (born Wales) gives no reason for his retirement other than to state his contract with MV Agusta is finished and he has no intention of going car racing.

Note: Gary Hocking was killed on December 21, 1962 while practicing for the Natal Grand Prix, Durban, Rep of South Africa. In an unexplained accident, Hocking, driving a Lotus 24, appeared to make no attempt to slow at the end of the fast back straight, the car hit a ditch and somersaulted. There was speculation at the time he blacked out.