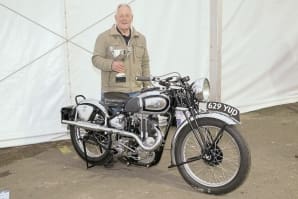 Though one doesn’t like to mention the weather when doing such things as show reports, sometimes it has such an impact on an event that it is impossible to ignore.

That, unfortunately, was the case with the 36th Carole Nash Bristol Classic MotorCycle show, held at the Royal Bath and West showground in Shepton Mallet.

It was, to put it mildly, rather wet and windy – in fact, the showground was barracked by a barrage of bad weather, as Storm Imogen unleashed its wrath on the UK, with the South West hardest hit, as 40mph winds and rain rampaged across the showground.

So with all that considered, attendance was remarkable, as the indoor halls filled up fast, though admittedly outside was sparsely populated. In fact, several traders gave up and went home, and who could blame them – even the hard standing areas were practically underwater.