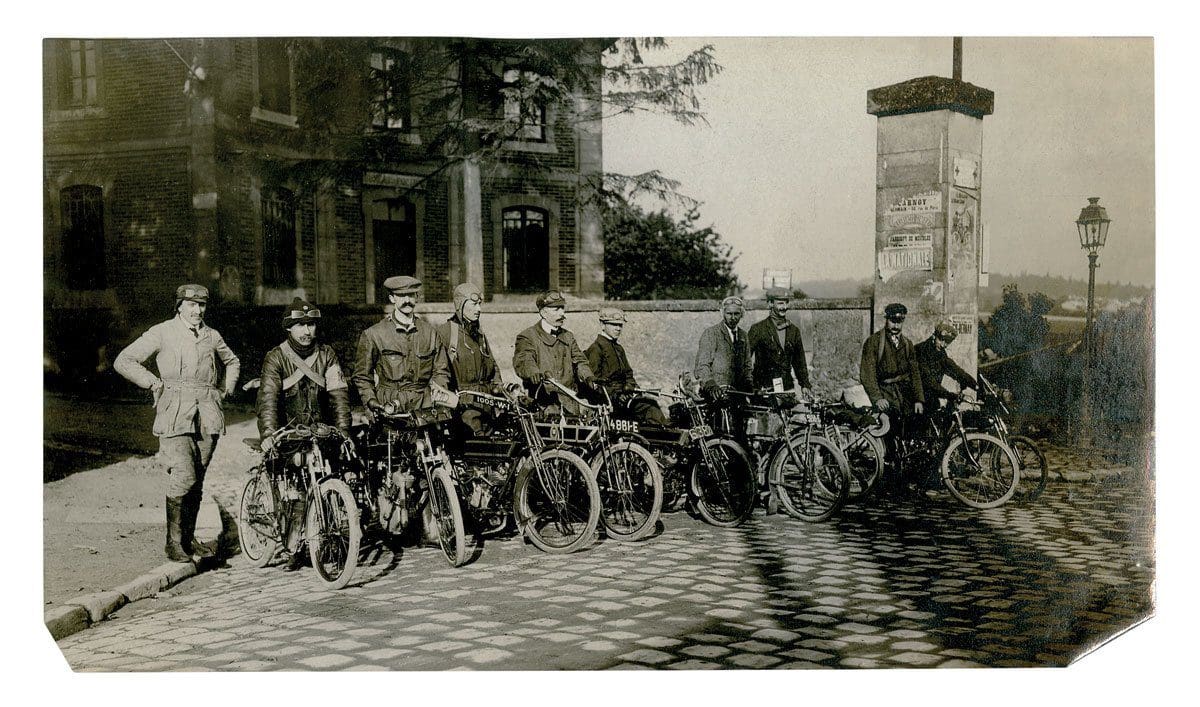 From 1912, a report on motorcycling over the Channel, featured in The Motor Cycle.

Correspondent Dagobert (presumedly taken from the Frankish king, who lived c603-639) reported on motorcycling in France, highlighting the many differences that exist ‘in the pastime and the industry’ between the country and Britain.

“It is at first sight surprising to find such wide differences in the development of the motorcycle in the two countries” our writer notes, before going on “…the Frenchman does not display anything like the same amount of enthusiasm for motorcycling as is shown by his neighbour across the Channel.”

By 1912, France had something like 37,000 motorcyclists, an accurately recorded figure, owing to the manner in which machines were registered and taxed; shortly after January 1, annually, each motorcyclist had to purchase a small plate ‘at one of the tax gatherers’ offices, or at one of the more important Government tobacco shops’ and then attach it to his or her machine. It was clipped, rather than secured in a more permanent manner, meaning that it was quite apparent if the machine was untaxed, by an absence of the plate. It was noted, though, that the same rider could use the same plate on two (or, one assumes, more) machines.

As well as annual tax, the French rider was ‘obliged to pass an examination and take out a driving licence similar to that issued to car drivers’ and then pay for said licence – a fee of 20 Francs (equivalent 16 shillings) was considered excessive as ‘…although the licence never requires renewing, it is hardly equitable that the driver of a 2hp lightweight should have to pay as much as a man in 60hp car.’

Dagobert then goes on to detail how interest in motorcycling had started to increase again, from a low in 1906, the French having been at the forefront in the early years. Of late, though, numbers had started to rise again, it being observed; “It is rather interesting to note that it [motorcycling] flourishes in the hilly district of France rather than on the plains.”

The article goes on to highlight the ‘unsuitability’ of Paris for motorcycling, while, “In comparing the number of motorcyclists in France and England, it must be borne in mind that the Frenchman does not have the same amount of leisure as the Englishman. To the average man the Saturday afternoon holiday is an unknown institution, and even the annual holidays are of a shorter duration than at home.”

The article goes on to detail club activity, overseen by the Automobile of France(‘…[which] appears to have too much contempt for the humble two-wheeler to pay it any attention whatsoever) while going on to explain how: “In the heyday of its prosperity, the motorcycle in France was an instrument of sport, and as such it became more powerful, more noisy, and more dangerous, until at last it was abandoned altogether.”

Now, though, there were green shoots of recovery, as French manufacturers started to make their motorcycles with up-to-date features like clutch and variable gear, as exampled by the Clement V-twin, so equipped. Other popular makers listed were Motosacoche, Magnat-Debon, Moto-Reve, FN and Alcyon, though – and despite stringent customs tariffs – ‘at least two English firms have secured a good position on the French market.’

The accompanying picture is simply titled ‘Start of a long distance town to town race in France’ with nothing more offered. What we can make out is that the two on the left are both single-cylinder machines, with third and fifth from left Motosacoche V-twins, or at least the engines are. Fourth from left – another seemingly side-valve single – has unusual forks, as does the machine sixth along. But, despite the charming nature of the picture, it’s difficult to deduce too much more.