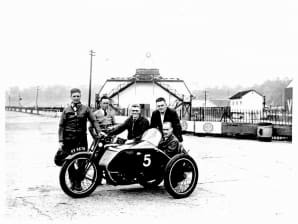 When designer Valentine Page joined the Triumph Cycle Co in 1932 he knew he would have to come up with some fresh ideas – and fast. Triumph’s motorcycle range was old-fashioned and sales were slower than a side-valve ticking over on full retard.

A quietly spoken gentleman with impeccable manners, Page had worked for JAP where he designed the 350cc ohc single which Bert Le Vack used to break the Junior TT lap record in 1922, and a 250cc version that set the world flying mile record at Arpajon in France.

Page also worked on the 1000cc ohv V-twins, one of which set the first 100mph lap at Brooklands.

In 1925, he was headhunted by Charles Sangster, boss of Ariel, and as chief designer Page was responsible for the new 500cc ohv and ohc Square Four.

By 1931 Page’s Ariels were wearing four-valve heads, and these bikes would become the famous Red Hunters.