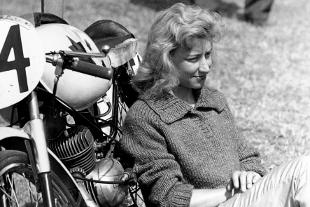 • (Wo)Men who mattered: Beryl Swain
The motorcycling world was shaken by a ‘blonde bombshell’ in the early 1960s, though soon ‘the establishment’ had her banned.
• Brian Bonny interview
• Classic advert
• For various budgets: tele-rigids
By the end of the 1940s, the telescopic front fork was well established, but rear suspension was slower to follow.
• Jerry Thurston column
• Archive photograph
'Sliding in the sunshine' was the headline of Motor Cycle’s May 5, 1966, and was in reference to the conditions generated by a combination of ferocious sidecar action coupled with a scorching hot day; while the sidecar men’s rubber melted onto the surface, the solo runners were faced with an increasingly slippery surface. And there were lots of sidecar races that day.
• Roy Poynting Column 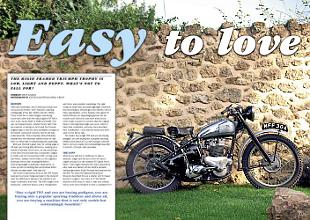 • Triumph Trophy TR5
The rigid framed Triumph Trophy is low, light and peppy. What’s not to fall for?
• Which model? Post-war Douglas twins
After the Second World war, Douglas pinned much of its hopes on its flat twin, horizontally opposed 350cc model, which while it was a fine motorcycle and had its staunch advocates, was rather too unorthodox and quixotic to save the company.
• Royal Enfield Bullet
• Reader’s restoration (Karslake Dreadnought)
• Restoration Guide – Velocette MOV and MAC
• Seen from the saddle
• Crocker – company history and road test
• Straight from the plate – 1928 Southern Trial
• BSA Bantam D1
To many, the Bantam is familiar and often overlooked – though it still makes an excellent, enjoyable, value for money classic, as explained.
• Closer Look – 1951 TT profiles
• You were asking
• Parts interchangeability – front forks
• Technical feature – gearboxes
• Next month
• Diary 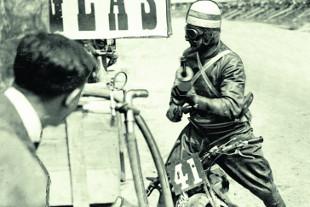 • Classic camera: French GP, June 1923
Five laps from the finish, Jim Whalley stops to refuel his flat-twin Douglas – he had a commanding lead, having inherited it on lap 14, after Gillard was forced to retire when his Peugeot parallel twin expired….

? Search for back issues and past features
? Subscribe to The Classic Motorcycle