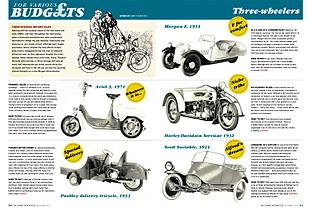 • For various budgets – three-wheeled motorcycles
Starting with the cyclecar boom of the late teens and early 1920s, and then throughout the intervening years, motorcycle manufacturers have occasionally attempted to bridge the gap between motorcycle and motorcar or van… 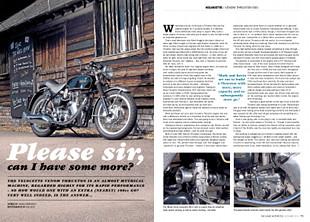 • Velocette Thruxton
The Velocette Venom Thruxton is an almost mythical machine, regarded highly for its rapid performance – so how would one with an extra (nearly) 100cc go? Very well indeed, is the answer…
• Seen from the saddle
• AJS Model 22
• Restoration Guide – Sidecars
• Closer Look – Humber
• You were asking
• Parts interchangeability – throttle controls
• Technical feature – valves
• Next month
• Diary
• Classic camera