View our 16-page Seen from the Saddle teaser below. Digital purchase options are shown on the back cover.

With the end of the First World War in 1918, thousands of British servicemen returned home to a nation that had been altered forever. Many young Britons had seen and experienced awful things, and many more at home had lived in fear and hardship for four long years.

The national psyche had been irrevocably changed and within the population – both those who’d seen action and those who'd stayed at home – there grew a desire to leave small villages, to travel, to experience thrills and spills… to live life to its fullest.

It was thanks to this cultural shift that two-wheeled travel came to prominence and it set the scene for the halcyon days of the British motorcycle industry. Suddenly everybody wanted to ride.

Motorcycle makers were enjoying a boom time with British manufacturers at the forefront of one of the world’s leading industries. It all seemed too good to be true…

The Wall Street Crash of 1929 hit the motorcycle industry hard and it was still suffering the after effects well into the 1930s. While there have been a few periods of renaissance, it’s hard to argue that anything has ever truly recaptured the glory days of the 1920s. 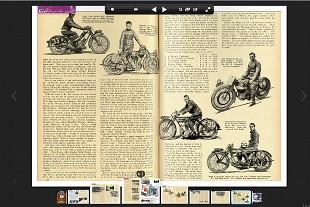 With motorcycles playing a vital role in many lives, it’s no surprise that motorcycle sport became a national phenomenon. Throughout the 1920s the Isle of Man TT was one of the biggest sporting events in the world, and with Grand Prix racing not starting until 1949, it was the premier sporting draw.

Spectators came out in droves (live action was the only action in pre-television days of course) to witness their heroes risk life and limb on the road and this early racing inspired many famous names who would go on to become the stars of the future.

The racing didn’t just capture the public imagination, but it became an integral part of a booming industry, allowing manufacturers to showcase their best machinery. It was a PR and marketing machine which in its day was truly ground breaking.

In the modern world, sport needs superstars to take it into the mainstream. It’s interesting that as this is written, many will be reading about the exploits of the peerless Marc Marquez who has become the first rider since Giacomo Agostini in 1972 to win the first five races of a MotoGP season.

It isn’t headline news in every media outlet just yet, but if he keeps winning, they’ll have to keep writing about him and who’s to say that his exploits won’t inspire young racing fans watching in the UK – it’s certainly what’s happening in his native Spain.

It's been 20 TT wins (and still going) for John McGuinness, so why isn’t he talked of in the same circles as other British sporting stars of the present day, many of whom have not enjoyed the same considerable success? There are reasons – some fair, most not – but unfortunately, for now, that’s the way it is.

History tells us that sport, like most organisations, goes through peaks and troughs and so we wonder; will motorcycle racing in Britain ever regain the heights that it reached in the roaring 20s…? Some may say that it already has; the name Barry Sheene springs to mind. But it seems unlikely that we’ll ever again see the combination of a thriving national motorcycle industry that is dominating the world alongside a national racing programme that is known the world over. What we do know though is that for an entire decade, nearly 100 years ago, that’s exactly what Britain had and it’s something that we should celebrate.

Want to find out more about the world of 1920s motorcycle sport? The Classic MotorCycle magazine has produced a special digital edition of archive material from Motor Cycling, originally written and published by editor Graham Walker – dad of Murray. Walker senior was a ‘works’ rider for Sunbeam, Norton and Rudge, and a TT winner. He was submerged in the racing scene, and his personal recollections are written in a charming manner, befitting a man whose knowledge and enthusiasm kept many up to date with racing during the 1950s, when he was a radio commentator for the TT, often working alongside his son.

This 140 page Seen from the Saddle collection is just £2.99 and can be purchased via The Classic MotorCycle app on Apple or Android

? View Seen from the Saddle and other digital editions

Unsure about any of this technology? Our digital team are on hand to help. To find out how to download the FREE app for your device you can email webmaster@mortons.co.uk or telephone 01507 529292