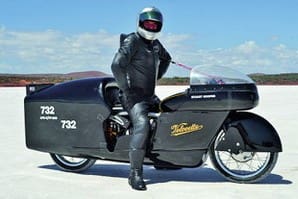 He said: “Finally the track was clear and the Big Velo boomed away from the line with its nearly 100mph first gear into a 7-10mph gusting head and slight crosswind. By the time I changed up from third into top at 156mph the bike was weaving and darting about in the ruts on the track and the odd gusts of wind, but with the throttle hard against the stop, one hand hovering over the clutch lever and the revs climbing towards the 6500rpm mark, the track markers started to slip by faster and faster, until the final timing light flashed past, and it was time to slow down, with the old MSS single leading shoe brake smelling as only red hot 50-year-old asbestos can.

“Back to the pits to see the crew flashing lights, cheering and jumping around…171.6mph. A fantastic end to a great week. The Velocette name is again in the record books were it belongs.”