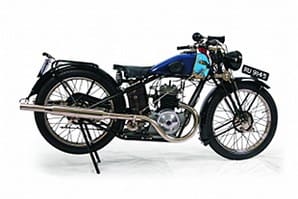 A regular prize winner on the vintage and classic scene, show and rally regular John Guy has restored countless machines over the years, though it is his stable of SOS machinery for which he is best known.

Len Vale-Onslow began SOS production in 1927, in Hallow, nr Worcester, producing mainly Villiers two-stroke powered machines, the engine in a frame that was oxy-acetylene-welded in chrome-molybdenum aircraft tubing. Originally SOS was an acronym for Super Onslow Special, though the sales slogan was Success on Success – mainly due to the company founder’s excellent competition record on his own products – though the name changed to So obviously Superior, after the company had been bought by well-known racer and tuner Tommy Meeten in the mid-1930s. SOS production ended in 1940.

This is the earliest of all John Guy’s SOS examples, dating from 1929. Bought by John in 1986, he acquired it because, “I wanted a vintage SOS after having three ‘normal’ 1930s ones.” How did you get in to SOS machines then John? “I found the first one locally and it just went from there with people offering me more…” John now has half a dozen of the machines, with his latest restoration a water-cooled 350cc version.

The 1929 example was acquired by John in 1986 and took 18 months to restore, debuting at Stafford in 1988 when it was best in show, as well as best vintage. John estimates the restoration cost £2000, but as he says “That was nearly 20 years ago now.” Though its still-immaculate state wouldn’t suggest it, the SOS has been used over those near-on two decades – it’s just that John keeps it carefully, dry-stored at his Hampshire home.

When he restored this model, John was able to deal directly with Len Vale-Onslow. Indeed, John thanks the late Vale-Onslow for his help saying: “I used to talk to Len who would disappear into the stores and emerge with something I needed…” One such example was the tank badge, for which John had no pattern. Luckily, when wading through some old paperwork, Vale-Onslow found one old tank transfer stuck to a letter which John was able to offer to paintwork specialists Lewis and Templeton, to use as a pattern.

Finding parts for the SOS and others of its ilk, is just a case of trawling through autojumble, in search of that elusive, needed part. It means restoration of machines like this is a real test of patience, perseverance and of course, an element of luck. John Guy possesses all those qualities and more as his superb restorations bare testament.