Starting with the recent online photographic competition, the winner was Ross Isaacson. Ross will be presented with his first prize later this afternoon by Nick Nicholls. His prize is a Panasonic Lumix DMC-FZ200 12.1 megapixel camera and kit, worth £600, and a canvas print of his winning image, both kindly dontaed by Comley Cameras. Second and third places were filled by Roddy Warriner and John Edwards, who both received a year's subscription to The Classic MotorCycle and a Bonhams catalogue, as well as complimentary tickets to the show, of course. 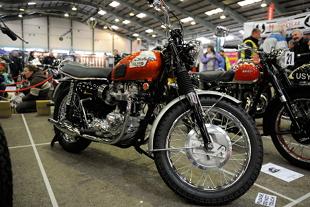 Best in show at Stafford was a 1969 Triumph T120R owned by Graham Bowen. Graham has restored the 650cc to original spec and used a mid-season paint scheme on the fuel tank.

Graham's bike will automatically go into the winner's entry pot for the CBC bike of the year 2013 competition, alongside the other best in show winners from shows held earlier on in the year. Then there'll be an online vote, so Classic Bikers Club users can pick their favourite – a best of the best in show!

Congratulations to all of the show winners, and to everyone who had a bike on display and made the Stafford show the best in the land.

Prizes will be awarded on stage this afternoon at 16.00 by our guest of honour Phil Read.