The track, once home to RAF and USAAF aircraft, and also used in the D-Day landings, accommodated a large crowd of excited spectators ready to watch their heroes fly around the track at high speeds. After winning the Thruxton race the previous year, Norton riding pair Phil Read and Brian Setchell started as favourites.

The Syd Lawton prepared 650SS ridden by Read and Setchell was expected to excel around this tight, fast circuit, which it duly did, allowing a repeat of 1962’s success. From the off, Read was closely followed by the Triumph Bonneville of Syd Mizen and John Holder, a machine which was entered by the Southampton dealership of TT winner Alec Bennett. Read and Setchell managed to get away from the pack but as the race came to a close, a broken clutch caused Setchell to lose a lot of the lead both riders had worked so had for – this long race (over seven hours, or 500 miles) came down to a distance of just a mile, with the Norton pair 65 seconds ahead of Mizen and Holder. This gave them the overall race win, as well as class honours in the up to 1000cc category. 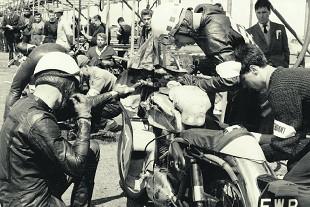 Meanwhile in the Senior (500cc) Class, an even closer race resulted in Brian Davis and Bill Scott on the Antar Motors Triumph Tiger 100SS bettering the Geoff Dodkin prepared Velocette Venom ridden by Tom Phillips and Tom Thorp by the smallest margin of the day – 42 seconds. In the Lightweight Class (250cc) a surprise victory was earned by Ken Martin and Francesco Gonzales on the 196cc Bultaco, the pair grasping a half lap victory from the fancied Royal Enfield jockeyed by John Hartle and Monty Buxton.

The close day’s racing at the circuit saw plenty of action, although the potential threat of Joe Dunphy and Paddy Driver (Tom Kirby Matchless G12 CSR) was destroyed by a series of snapping chains and a small spill sustained by Joe. Ron Langston, who was riding the Taylor Dow BSA Rocket Gold Star partnered by Dave Williams, had pushed himself and the bike, even getting the lead at one point around the three hour mark, though this advantage was short lived – a frantic pit stop failed to stop the team dropping back many places as an oil union broke on the bike. Third finishing spot was claimed by John Bowman and Ron Chandler on a year old Bonneville, fourth Mike Duff and Bill Smith on a CSR 650cc Ajay, with fifth and sixth the two best 500cc class runners.