During the 1920s, much debate raged about the use of special machines in competition (for example, the TT was originally the Tourist Trophy…) and the fact that the ‘tests’ had ever-littler relevance to the ‘man in the street.’ So the ACU’s riposte was the annual ‘buyers’ event’ that was to become the stock machine trial. Started as a one day affair in 1922, by 1927 it was up to a full six days while the 1925 event – the last before the 1927; the general strike of claiming the 1926 event – was reckoned as having “hardships… seldom encountered on a six days trial”. And so to 1927. 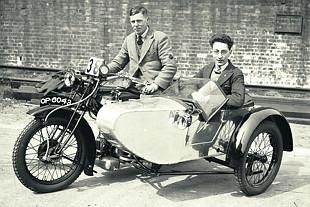 There were 20 manufacturers represented, with a total of 62 riders – the largest contingent came from Douglas with six (three 600 and three 350s) while most factories opted for three or four representatives. Of the starting 62, 56 completed the course, with six classified as retirements, though one of them (Phil Pike) did the full trial but as he was under ‘observation’ (one assumes it was part of a Maudes Trophy attempt) he was ineligible for an award. Gold awards went to 52 of the finishers, with 36 ‘clean sheets’ recorded. And further to that, four teams (AJS, BSA, Sunbeam and Triumph) had all their riders ‘clean’.

That there were only five retirements (not counting Pike) is testament to the toughness of the models – and the retirements were wide in variety too, one being a set of broken forks, another ‘tyre trouble’, a third a broken chain, a fourth a duff magneto (which was remedied almost immediately after the rider had been forced out) while the fifth was a lost nut from the steering head. So, really, only one of the five retirements was a ‘serious’ issue, which was a credit to the quality of the ‘stock’ machines then being produced. By trial’s end, they had completed 750 miles in which there had been (said The Motor Cycle) “…a constant demand on brakes, engines, gears and frame parts. Thus the award list provides to purchasers of motorcycles a guide even more trustworthy than has been the case in former trials of this kind.”

? To view the rest of the pictures in this set and to order prints please visit www.mortonsarchive.co.uk