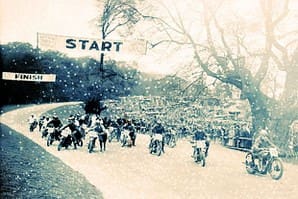 Almost his namesake, Bryan, (with a ‘y’) Sharp on a 200cc two-stroke Dot-Villiers, was the victor in the Lightweight event while his brother Triss (‘the younger’ – their father, Triss, was a well-known speedway rider) won the 125cc event on another Dot.

Unluckiest man of the day was Stonebridge’s AMC teammate Geoff Ward, who was on an AJS-badged machine. His gearbox broke when he was laying third in the 350cc class and he crashed when he was neck-and-neck in the 500cc race. Ward did though win the Longmoor Cup, for the fastest lap of the day.

Despite AMC taking the top spots, BSA’s trio of David Tye, Johnny Draper and John Avery won the manufacturers’ team cup in both Senior and Junior races. The same three riders were representing the Sunbeam Club too, so they duly took that prize as well.

First race of the day was for lightweights, in which Bryan Sharp led a Dot clean sweep of the top three, heading home Bill Barugh and D Wright, after fancied runner Terry Cheshire had problems early on – he was also Dot mounted. Ultra lightweight (125cc) winner was Triss Sharp.

Thirty of the 40 entrants lined up for the 350cc race and when the starter (Len Heath, prewar Ariel star) dropped the flag, Hubbard (Matchless) made a stormer… but it was short lived, with Stonebridge soon overhauling him and establishing an unassailable lead. Draper led the chasers, with future trials machine maker Graham Beamish next along. While the top six were all AMC or BSA, seventh was Jim Alves, on his Triumph twin. After Beamish and Ward dropped out, all settled down, with Stonebridge’s lead reduced by several seconds on the last lap – but only because Brian slowed down, in a safety first policy. And first was where he finished.

A field of 40 (30 500s, a septet of 350s and a trio of 200cc Dots) came to the line for the Senior race though a bizarre start-line incident effectively ‘did for’ the Ariel challenge. NS Holmes, Frank Bentham and C M Bennett were all on swinging arm rear, Earles-fork models, with Harold Lines on an orthodox job – but Holmes was ‘attending to his machine’ which was being held up by Bentham with Lines assisting, as the starter dropped his flag and the field roared off… Holmes and Bentham set off late, Lines not at all.

They’d have never caught Stonebridge though and although Ward ‘had a go’, Brian was imperious. A crash did for Ward’s challenge – Stonebridge and he leaped together at Flagstaff Hill and Ward came down at full lock.

He crashed heavily, while Stonebridge rode on, unencumbered, to a comfortable (minute and a half) victory, with Les Archer (Norton) second and Dave Curtis (BSA) third.

To view the rest of the pictures in this set and to order prints please visit www.mortonsarchive.co.uk