The ordinary clubman had no chance of securing a new, state-of-the-art racer, so was left with two options. One, soldier on with the old, outdated machinery, or, two, update what they had. Phillip Webb chose the latter.

Webb, a 27-year-old Admiralty laboratory assistant from Surbiton, only came to motorcycling in 1946 – but then the previous few years most likely hadn’t afforded much opportunity for two-wheeled fun. Three years into motorcycling he participated in his first race, on a OK Supreme, and then in 1950 he bought a 1939 490cc Manx Norton, which in the climate of the times, was just about as good as the clubman newcomer could hope to purchase.

But Webb was determined to improve his chances. He’d become friends with well-known local enthusiast Harry Bostock and his pal and mechanic, Jack Hammond. In Hammond’s amateur Surbiton workshop he set about modifying his ageing Norton – with the ‘mods’ being extensive enough that it was deemed worthy of a feature in Motor Cycling of March 29, 1951. 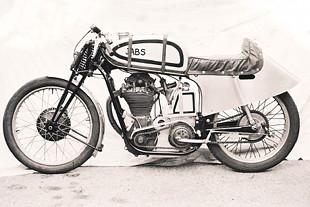 It explained thus: “Engine and gearbox remain untouched… save the bore was increased by half a millimetre to bring the capacity up to 490cc. The frame however was scrapped and a new one built up of mild-steel 12 gauge by 1in diameter tubing welded up to a 2½in diameter mild steel tube head.” Gusset plates were added for strengthening while a pivoted fork rear was fashioned, using modified Bostock hydraulically damped plungers.

Cost had meant that the Norton front fork was retained, along with a steel rim, and the Norton brake was modified, mainly for cooling and lightness a large area had been cut and substituted with mesh. The rear brake was also the subject of ‘considerable’ attention.

Webb made his own five and a half gallon aluminium fuel tank and also enclosed the top half of the rear wheel in an aluminium fairing, on top of which was the racing seat.
Handlebars were from 7⁄8in 16 gauge tube, with the control levers made from dural sheet.

Said Motor Cycling: “One of the more creditable aspects… is the immense amount of work put in by Webb. Such operations as welding had to be put out but even the tin bashing was done (by Webb).

“The complete dry weight of the Norton is now 245lb; in its original form it scaled 310lb. Phillip Webb is making no rash claims for his creation but is quietly confident that it will not disgrace itself…”
Oh, and JABS? ‘Just Another Bloomin’ Special.’