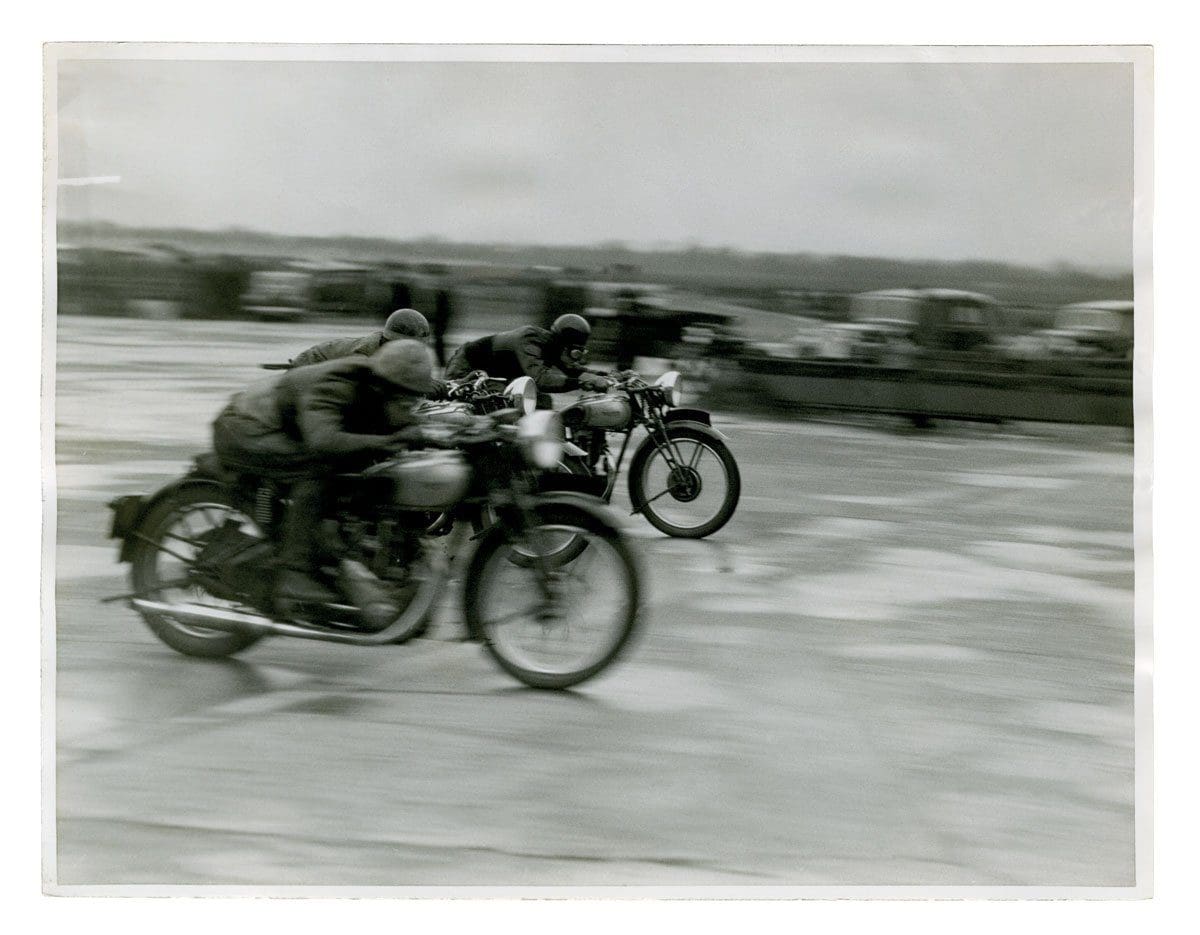 In the early part of 1937, ‘a demonstration of the high speed reliability of Triumph Tigers’ was undertaken.

Our rather remarkable picture was one of a series used to illustrate an article covering a strenuous, ACU-observed trial, undertaken with three Triumph Tiger single cylinder models – a 250cc Tiger 70, 350cc Tiger 80 and 500cc Tiger 90.

Previewing the attempt, The Motor Cycle began by explaining “Since there is not to be a stock-machine TT…” which highlights that there was obviously some clamour for such an event to take place – of course, the idea was to be revisited, but it was 10 years after our image, so 1947, that a Clubman TT was instigated. But we digress.

With no Stock/Clubman TT to happen, so Triumph decided to set about a headline-grabbing stunt to underline the excellence of its over-the-counter products. To that end, three brand-new machines were chosen which had already been sent to dealers – the Tiger 70 came from W Brandish and Sons, Coventry; the 80 from Glanfield Lawrence, London and the 90 the Colmore Depot, Birmingham. Officials of the ACU did the choosing and the trio were transported, by lorry, to Donington Park, under the supervision of EB Ware, of the ACU.

Here, on a freezing cold March Tuesday, in terrible conditions (the track being in a ‘treacherous state’ owing to large patches of ice) the machines were readied, which basically amounted to checking everything was tight and all the tanks were full, as well as fitting Moseley Float-on-Air cushions to the rear mudguards. Then the three riders – FE Thacker on the 250cc Tiger 70, Allan Jefferies on the 350cc Tiger 80 and Freddie Clarke on the 500cc Tiger 90 – took to the track, to run the machines in, initially at 20mph, then 40mph.

The ice thawed and turned into a steady downpour. The 250cc rear tyre went flat and a new wheel was fitted, while the 500 developed an oil pump fault which necessitated a strip and clean; no new parts were required. Until lunch a gentle pace was maintained, then, after, ‘the riders gave the machines their heads a little’ and thus concluded the afternoon, still in heavy rain. The machines were then wiped down and locked away.

Next morning, 9.30am, it was the start of the high-speed test. No early trouble was encountered, then the Tiger 90 oil pump started acting up again, necessitating another strip and a touch of fettling, before, after eight minutes, Clarke was back on his way. After an hour, the 250cc model had covered 27 laps, Jefferies on the 350 30, the 500 26. Half-an-hour on, the totals were 29, 44 and 41, the Tiger 90 going well, but then heavy rain came again, while the HT lead of the Tiger 90 then came adrift at the magneto end. It cost another eight minutes. After two hours, it went Thacker/Tiger 70 (who took a load speed tumble) 53 laps, Jefferies/Tiger 80 59, Clarke/Tiger 90 53.

The rain stopped and the sun shone brightly for the final of the allotted three hours – minor problems included Jefferies’ rear numberplate falling off – and the motorcycles were reported as finishing ‘beautifully clean, the two smaller ones not showing a trace of oil leakage and the big one just a drip from the rocker box’ while: “The 500 Tiger showed a slight blueing of the exhaust pipe, but the other two models were not discoloured in the slightest.”

The trio of Tigers were then transported to Brooklands, where it would appear our picture was taken. Furthest from the camera is Thacker on the 250cc Tiger 70, obscured is Jefferies on the 350cc Tiger 80, blurred is Clarke on the 500cc Tiger 90. The recorded flying lap for each was 66.39mph for the littlest, 74.68mph for the medium, 82.31mph for the biggest.