Initiated by the Royal Society for the Prevention of Accidents (RoSPA), the joint organising committee was made up of RoSPA, the Auto-Cycle Union (ACU) and the Royal Automobile Club (RAC). Location was Hendon Aerodrome. The Metropolitan police was throwing its full weight behind the competition too, the stated aim of which was ‘…encourage riders to achieve the highest possible standards of roadcraft, skill and courtesy…’ according to the report in The Motor Cycle. That publication was also supporting the event, as was its weekly rival, Motor Cycling, with both sending ‘men’ along to help with judging and officiating; indeed, Motor Cycling was represented not only by its editor, Bob Holliday, but previous incumbent Graham Walker was also in attendance too; Mr Walker had the job of judging the ‘go-stop-go contest, while Mr Holliday was presiding over the ‘riding the plank.’

There were 54 competitors (Motor Cycling; The Motor Cycle said 60) in the event, who had won their places by dint of success in one of the eliminating heats held at 12 centres in the London area. Apparently, hundreds of riders had attempted to qualify and gradually the number had been whittled down – in the end, Motor Cycling reckoned 13 London boroughs were represented.

The competition was divided into three classes – scooters, and motorcycles above and below 250cc. Competitors licences and insurance certificates were checked for validity when they signed on, after which machines were given a thorough inspection for roadworthiness, with marks lost for any defaults. Riders’ kit was also given a thorough going over too, with particular attention paid to the compulsory-for-the-event crash helmets. Only one, R Knight of Carshalton, came through the ordeal without penalty. 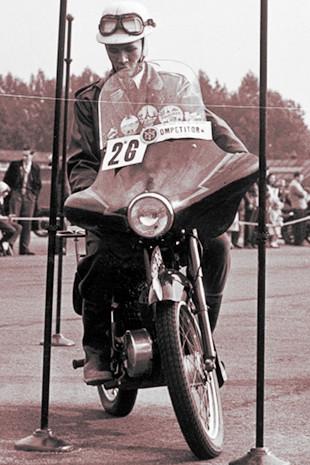 Then it came to the actual riding. There were five tests of ability, to reveal the finalists’ skill in handling their machine, with up to 20 marks accrued for mistakes. The names of the tests were banjo, wiggle-woggle, hill climb, riding the plank and go-stop-go which may have sounded jokey, but all were approached with absolute seriousness. Apparently, the wiggle-woggle was causing most difficulty. The test called for tight turns between five pairs of posts in a zig zag formation, with progressively smaller gaps between the two posts – at the final ‘gate’ there was only half an inch clearance on each side over the handlebar width. Only five of the entrants were unpenalised.

Next up in difficulty was judged the hill climb. In this riders had to ride onto a ramp, stop at a particular line, kill their engine and restart, without moving backward. Apparently, plenty lost marks, some down in no small part to riders not taking into account the effect of extension/compression of forks following braking.

Following that came an oral examination on the highway code and the law.

While the judges worked out who had won, the crowd (of well over 500) was treated to a demonstration by the riders of the Hendon District MP Garage who gave, said Motor Cycling, ‘…instructive and at times excitingly realistic demonstrations of how accidents are caused and then avoided.’ The Motor Cycle expanded; “The demonstration and its excellent commentary underlined the causes of common, avoidable accidents and was made all the more impressive by the skill and timing of the riders and drivers.”

'Following a parade, all the riders lined up for an address by Assistant Commissioner DE Webb, who "…spoke of the rapid increase in the number of two-wheelers on our roads (there are now over 280,000 in the greater London area) and pointed out how desirable it was that riders should use every means in their power to reduce accidents."'

Following a parade, all the riders lined up for an address by Assistant Commissioner DE Webb, who ‘…spoke of the rapid increase in the number of two-wheelers on our roads (there are now over 280,000 in the greater London area) and pointed out how desirable it was that riders should use every means in their power to reduce accidents.’ (The Motor Cycle).

And so it came to the crowning of the first ever ‘Metropolitan Motorcyclist of the Year.’ Man chosen was R Kelly of Hounslow, a member of the Triumph OC. Mr Kelly suffered the loss of 71 marks, while his nearest challenger, Mr Pitson from Uxbridge, had 10 more. Pitson did win the up-to-250cc class though, as Kelly was on a bigger banger and took that class (the over 250cc) as well as the overall title. Best scooter was C Tattam on his Zundapp Bella, on 88. Indeed, the only three riders on two figure numbers were these three class winners, with all other riders well into three figures. Our man here, Bowe, didn’t figure in the results though his wiggle-woggle looks pretty good…