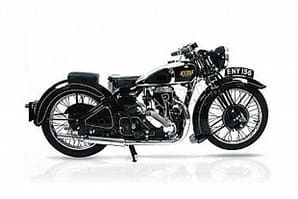 This Rudge has been a fixture of the classic show scene for many years, with jovial owner John Fisher picking up prizes year-in, year-out with the black and gold stunner. It isn’t just a show pony though – John still rides his Rudge, with one of the machine’s annual appearances at the Wolds Run…where it often picks up a pot for its owner to add to what must be quite a collection of silverware.

Suffolk man John knows on exactly what day he bought the Rudge – the 22 September 1957. Why did he choose a Rudge? “I only had £5 in my pocket and that was the price it was!” he explains. John passed his motorcycle test on it in 1958 and has kept it ever since. When asked how long it has taken to restore, his answer is simple; “A lifetime!” he exclaims.

Despite now enjoying a fine reputation and an enthusiastic following, Rudge motorcycles were only made for a relatively short period of time (less than 30 years) though during that spell the firm built up and continually maintained an enviable reputation.

John Fisher’s Special comes from the near the end of the Rudge production span, dating from 1939. The Special has a four-valve head, with the valves set parallel rather than in semi-radial fashion as on the Ulster. The Special was catalogued as a more touring orientated mount, designed to provide fast, effortless performance.

Though it wasn’t the range leader, the Special was supplied with the kind of specification that could shame many of the motorcycles that headed up rival firms’ list of offerings.

Though things like electric lights and speedometers were now standard offerings by most, Rudge listed various items that others didn’t. For example, the Special came with a quickly detachable rear wheel as standard, plus the useful effort-saving lifting lever for the centre-stand (to be ‘re-invented’ by Vincent for the Series D in the 1950s…). Also the Special had fully enclosed valve gear, and the clutch was also fully enclosed in what was thought to be one of the most leak free covers. Other advanced features included coupled brakes (another ‘re-invention’ some time later, by primarily Moto Guzzi in the 1970s), folding kick-start lever and fully shrouded gearbox.

John Fisher has enjoyed all of these features of his Rudge Special for what will be 50 years this September. Though it is impossible for him to put a figure on the cost of restoring the Rudge over the years, he describes the whole experience as ‘priceless.’ And we agree.