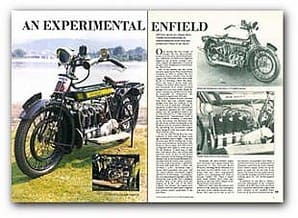 Why Royal Enfield became involved with three and four cylinder engine designs soon after the outbreak of the 1914-18 war is unknown, although it should be recalled that the manufacture of machines destined for the civilian market was not prohibited until as late as 15th February 1917. Like most major manufacturers, experimental work at Royal Enfield remained a close-kept secret. Even those who had spent virtu­ally the whole of their working life at the Redditch factory remained oblivious to the interesting but unorthodox engine units designed, built and tested during those wartime years.

It was not until World War Two that evidence of work from all those years ago eventually came to light — and only then because Motor Cycling was in des­perate need of historic information with which to fill its pages now that motor cycling bad once again to come an end `for the duration'. In their issue of 30th May 1940 Henry Laird, one of their staff reporters wrote of how he had delved into a museum of interesting old designs during a visit to the Royal Enfield factory. Amongst them he found a unit-construc­tion four-in-line four-stroke, a transverse vee-twin with shaft drive, a 350cc oily vee-twin, a 225cc two-stroke with a sleeve valve-controlled inlet port, and the three-cylinder two-stroke engine referred to in this feature. According to the accompanying photographs, only the four-in-line four stroke was a complete machine. Most of the others were just engines or, in the case of the three cylinder two-stroke, an engine unit complete with two-speed gear, magneto and exhaust system, suspended in the bare frame.

Eventually, the three-cylinder engine unit, less frame and exhaust system, was presented to the National Motor Museum (Montagu Motor Museum as it was then) by the Enfield Cycle Co Ltd along with four other experimental engines, on a 'permanent loan' basis, to become Exhibit Z39. There it stayed until Royal Enfield itself went into oblivion at the time of the collapse of the British motor cycle industry.

When, at a later date, the motor cycle section of the Museum was redesigned and some of the exhibits became super­fluous, they came up for sale at one of the Beaulieu Autojumbles. Ken Blake, a w 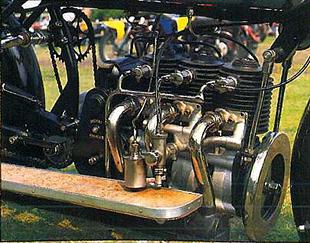 ell-known motor cycle enthusiast from Parkstone, heard that the three-cylinder Royal Enfield engine would be up for grabs, so made sure he was first in the queue. His bid proved successful and he was quickly seeking a suitable frame and running gear for his newly-acquired engine.

Near-side photograph
Fortunately, he was able to obtain a near-side photograph of the complete machine as it had once been and from this it appeared obvious the engine had been installed in the modified frame from one of the period standard production vee-twins. It did not take long to find a complete 1915 vee-twin in Stoke-on-Trent, which would provide not only the frame but all the contemporary running gear.

The first stage was to modify the vee­twin frame to accept the three-cylinder engine unit, which necessitated bending back the saddle tube some three inches to the rear. As this meant rearrangement of the rear chainstays, he had to modify and lengthen them by three inches. As a result, the rear carrier now sloped down­ward at the front. Checking with the photograph showed that the carrier had sloped downward on the original design so Ken was unwittingly following a similar path! At the front end the front down tube had to be cut off and a special lug made so that the tube could be bifur­cated to accommodate the much wider engine unit. With only one photograph of the original available, and that side-on too, it was impossible to perceive the arrangement the factory had used, although it did look as though they used something like a pair of inverted bicycle forks in profile. Ken got around this by using a pair of half-inch rods, suitably bent, attached to a horizontal bridge piece at the lower end of the specially-made lug. It provided exactly the right support and looks the part too, with the rods nickel plated.

The engine showed signs of having been worked hard and the top piston rings, 8mm in width, were so embedded in their grooves that they were broken while trying to remove them. Each piston was of the deflector type and carried two rings, one at the top and one at the bottom. The main bearings were of the caged roller type, the forward engine that supported the large dia­meter outside flywheel having two of these bearings on the flywheel side. Crankcase compression was retained originally by spring-loaded fibre washers, but Ken has been able to make use of modern technology by using an `0' ring in place of the foremost seal, and double lip seals on the centre engine. The rearmost seal is less of a problem as a thrust race is positioned there for the two-speed gear. The engines are joined together at what look like Oldham coup­lings at first glance, although on close inspection it can be seen that the tongues are not at 90 degrees to each other but more like 45 degrees to pro­vide better metal thickness. Each is numbered, to ensure correct location.

Standard 225cc engines
Although the engine looks like three standard 225cc engines joined together, this is not actually so. Their crankcases have been specially cast and are wider. A bevel drive transmits the power to the two-speed gear, which has two separate chains and is of the expanding shoe type. Starting is by handle, the mounting being close to the rear end of the petrol tank. Lubrication is by petroil, using a 16:1 mix. The separate oil tank that forms part of the main fuel tank is now redun­dant and used as a reserve petrol store. 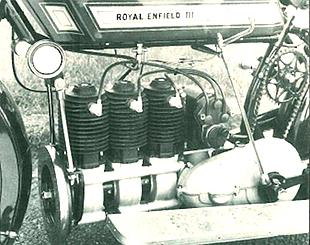 lly, the overall gearing presented a problem, as the only sprockets that can be varied in size are those of the final drive. Starting with a 15 tooth output sprocket from the two-speed gear, it was soon found that this could be increased to 21 teeth with advantage and that the final drive sprocket on the rear wheel (for the vee-twin) could be brought down in size by no less than four teeth. Even though top gear is now 3.25:1, it seems this could be reduced still further. Originally, a pressed steel cover enclosed the forward end of the secondary drive, but this has been improved by cutting and shutting the aluminium alloy primary chaincase used on the vee-twin. Skilfully carried out, there is no sign of the join and with the word 'Enfield' cast on its exterior, the alloy cover looks just the part.

A very large Thompson Bennett magneto supplies the ignition require­ments, the near-side incorporating a dis­tributor that forms an integral part. It runs at 1 y, times engine speed. Carburation is by a period Brown and Barlow carburettor of seemingly small choke size that is more than adequate for its purpose. Mixture is distributed through a three-branch induction mani­fold and above it is a three-branch smaller diameter tube that links the three decompressors, discharging below the right-hand footboard.

The exhaust system is a real work of art, specially made by Technical Tubes of Longham, which fitted exactly first time when mated up. It too is of the three-branch type, discharging to a long expansion chamber mounted longitudin­ally under the right-hand footboard. It is, in fact, the original expansion chamber off the original vee-twin, with its two separate outlets. It can be dismantled for cleaning if necessary. The restoration work took Ken, renowned in this part of the country for his expertise, three months.

Long wheelbase
Despite its rather long wheelbase, the machine is by no means a handful to ride. It starts easily and is so flexible that it is possible to change to top gear when the speed has reached about 1 Ompli. Like most two-strokes, the engine is at its best when it is puffing, such as travel­ling along a lengthy gradual incline. Light running tends to produce a hap­hazard result, with no proper or regular idle. On a steeper hill, the speed falls off more rapidly until about 30mph, where­upon the engine seems to develop a good amount of torque and pulls strongly.

It is commendably oiltight, but the fuel consumption is around the 35mpg mark — acceptable today perhaps, but not in the days of old when 80-90mpg was quite common, even on some of the large capacity machines. Fortunately there is very little torque reaction from the quiet running in-line engine. Most noise comes from the chains of the two-speed gear, as it is almost impossible to tension them equally. The bevel drive is adjustable by means of cup and cone bearings. The two-speed gear has, of course, no clutch. The machine remains stationary when bottom gear is selected, then moves away smoothly as the throttle lever is opened, in a manner reminiscent of automatic transmission with which most of us are familiar today. The brakes are decidedly 'period' however so that advance warning of the need to stop be­comes a necessity. Only the back brake is reasonably effective and still relies upon its original brake block.

One can only speculate why the Royal Enfield three never went into produc­tion, although I suspect it was mainly due to two problems — the question of assembly time and, even more important, the very high petrol consumption. I cer­tainly do not subscribe to the reason put forward in a brief note about the engine that appeared in the 13th February 1964 issue of The Motor Cycle in which the writer suggested it may well have been due to cooling problems with the rear­most cylinder.

This myth has been exploded by Ken, who found that if anything, the rearmo 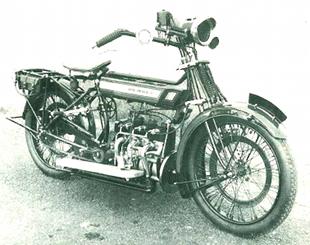 st cylinder ran cool, its sparking plug having black coloured electrodes com­pared to the almost perfect light ebony colour of those of the centre plug. If any­thing, it is the front cylinder that runs hot, its plug showing the characteristic white shades associated with overheat­ing on a weak mixture. Most probably it has a greatly reduced airflow through being in the partial vacuum created by the very wide front mudguard Slots or louvres cut in the mudguard would prob­ably go a long way in increasing the air­flow here, as in the case of many modern off-road two-strokes.

The Royal Enfield three made its debut in this year's 21st Anniversary Weymouth Run, which it completed without prob­lems and created much attention. It then took part in the TT Rally, where the accompanying photographs were taken, and more recently in the Banbury Run. It is now on display in Sammy Miller's Museum at New Milton where, despite being amongst a unique collection of the most exotic machinery, it stands out on its own and is the focal point for many of the visitors. It could so easily have been lost for ever…