It’s a funny thing about Royal Enfields; to the great majority of motor cyclisis this was a range of worthy if not particularly exciting models, pro­duced by solid citizens inhabiting farming territory somewhere near Ambridge. Totally unfair, of course, because the firm had a praiseworthy record in events such as the ISDT, their Bullet singles were quite covet­able, and their vertical twins could go very quickly indeed in production-machine races – especially when handled by Bob McIntyre – though, sadly, they never seemed to last until the chequered flag fell.

In due course, as we know now, a chap named Steve Linsdell would hap­pen along, to do a spot of inspired magic in a lawn-mower workshop and prove to everybody that a 350cc Bullet and 700cc Super Meteor were basically highly competitive motor cycles in­deed. The only pity is that by then Royal Enfield had folded.

That's as may be, though, because the model we are considering here is the Continental GT, which was brand-new for the 1965 season. It was totally out of character, of course—big-bore carb, swept-back exhaust, clip-on bars, humpy racing seat, and a bright-red fuel tank in glass-fibre (legal then, but frowned on now) adorned with the "Royal Enfield" name in big white let­ters; rather like grandma entering a disco dancing championship. But the youngsters loved it, and that was the whole object of the exercise.

In the beginning there had been the Reg Thomas-designed unit-construc­tion Crusader which, most unusually, carried its timing gear on the same side of the pot as the primary drive. In due course came the Crusader Sports with sportier cams and a somewhat disgusting habit of bleeding oil from every joint (the result of high blood pressure).

Still, the Redditch team worked at it, and the Continental GT when it arrived was commendably less drip­py – though, agreed, by no means per­fect in this respect. The Albion five-speed gear cluster had been improved, too, and was less prone to offering an assortment of neutrals than had been the preceding Super-5. The exhaust was decidedly naughty, yet even that was entirely in keeping with the youth­ful image of the model.

In short it was a fun bike, and one well worth finding and restoring as a classic of the future. Note the sum­ming up in the following road test (from Motor Cycle for 31 March, 1966): "Undoubtedly the finest two-fifty Royal Enfields have ever made". I wrote those golden words myself and, in retrospect, I wouldn't withdraw one of them. Sadly, the Continental GT was to have only a three-year produc­tion run, and the last were built in 1967.

“Joined the coffee-bar crowd, then?" The questioner was Jeff Smith, leaning from his scrambles pick-up as the little red bike came alongside in heavy traffic. One couldn't help but grin. Clip-ons and rear-set footrests are not everyone's cup of Max­well House.

Still, give a chap a hot two-fifty and it's a certainty that he will want to drape it about with bolted-on goodies. So (reasoned Royal Enfields), let's fit the doodahs and whatsits—revmeter and all—from the word go. Besides, a bike properly sports-tailored at the factory can be a better proposition than one to which clip-ons have been added by unskilled hands.

Snazziest looking
What emerges is just about the snaz­ziest-looking sportster ever. There's a sleek, glass-fibre tank in fire-engine red, adorned by the Royal Enfield name in bold, white lettering; a huge breather pipe, in clear plastic, led to the tail of the machine; two big dummy brake-cooling discs on the front hub; a racing-style dualseat with a fashionable humped rear pad.

Real pay-off, though, is that the Con­tinental GT goes every bit as well as it looks.

Anyway, not to worry about the riding position, which is more comfortable than it looks once you get used to it. This bike was never intended as a town runabout and in­, ching forward in slow-moving traffic at rush hours does induce wrist-ache – but show it an open road, let it get into its stride, and it becomes a different bike altogether. 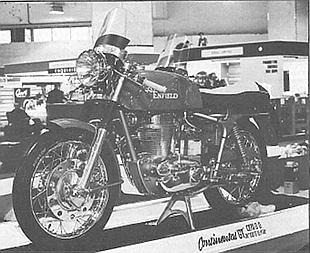 The low bars allow you to tuck your elbows in neatly; get down to it properly and watch the needle go soaring round the dial – past the 90mph mark in favourable circumstances (this was on MIRA's outer circuit, be it added).

To produce the very best in performance you keep an eye on the revmeter rather than the speedometer and change up at the peak bhp point (7,500 rpm) on each cog.

As on the majority of machines, the speedometer was inclined to flatter; it read about 6mph fast in the higher reaches.

Much of the credit for the high-average potential should go to the springing—a little on the soft side, but with impeccable damping which allowed the machine to float over the ripples as though it were a hovercraft.

Maybe it is sticking one's neck out to describe the navigation as faultless, but any doubters should try a GT for them­selves.

Except for having somewhere to hang the twistgrip and control levers, a han­dlebar of any kind is well-nigh superfluous, for this is a machine which flows through the bends without a waver.

Most satisfying of all is the conviction you feel that this is all one hundred per cent motor cycle, a complete machine rather than a collection of bits and pieces in a frame.

Nothing flaps, vibrates or rattles, while the celebrated vane-type shock absorber in the rear hub plays its part in keeping the power supply smooth all the way.

Nothing rattles? Well, maybe the valve gear does (clearances are bigger than is usual on a roadster) but even that is a solidly soothing sort of rattle, somehow quite appropriate. 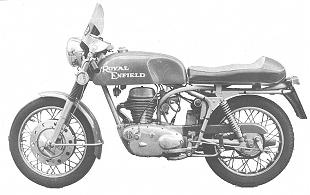 Brake and gear-change pedals marry in nicely with the rear-mounted footrests and can be operated from the crouch without any awkward wiggling of the ankles:

Gear-pedal travel is extremely short and the cogs mesh cleanly, without clash or any effort. Neutral is a shade tricky to find, par­ticularly with the model at a standstill. It helps to permit the clutch just to bite while the pedal is eased upward from the second-gear position.

Both handlebar levers are long, ball-ended and light in operation.

Royal Enfield machines have a reputation for good braking, but the front stopper of the GT is surely the best that Redditch has yet produced. Not vicious, rather a prime example of friendly persuasion.

With both brakes used together, a stopping distance of 28ft bin from 30 mph was recorded, a performance far above average. Nor did heavy braking at the end of a series of flat-out runs produce any sign of fade.

For an out-and-out sports model, the GT proved to be remarkably economical, returning a consumption figure of 115 mpg at a steady 30 mph. Understandably enough, the tank level sinks a bit more rapidly when the grip is held open, but not so rapidly as all that.

Nobody is going to grumble at 64 to the gallon at a maintained 70-per.

One of the most noticeable features of the Continental GT is the big-bore breather pipe. All very sporty looking, but it isn't just for show.

On this model the designer has com­pletely revised the breathing arrangements of the basic Crusader design, with the aim of overcoming past criticisms of external oiliness. In that he has succeeded entirely. Through miles of hard riding the engine unit remained completely oil-free.

It is quite possible to ride a GT quite quietly through built-up areas, by judic­ious use of the throttle, but when the throttle is used joyously the exhaust is apt to be raucous. Therein lies the only black against the model.

Lighting is well up to the mark, with a main beam amply bright for main-road cruising in the sixties at night. However, the ammeter can't be seen unless you sit up and peer over the flyscreen.

This is undoubtedly the finest two-fifty Royal Enfields have ever made, one which can be enjoyed every mile of the way. It is sweet-natured and accommodating — built to go and built to stop.