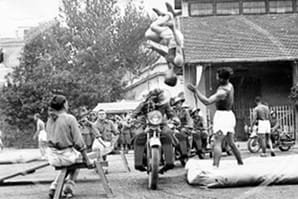 Rigorously trained and capable of covering enormous distances at speed, the Bersaglieres were highly effective skirmishers and shock troops – attributes that only improved when they were provided with specially manufactured Moto Guzzi motorcycles in the early 1930s.

On June 22, 1936, in the city of Rome, the men of the Bersaglieri celebrated their centenary. They performed thrilling displays of trick riding, among other things, to celebrate their first 100 years of military service. The history of the motorcycles that they are pictured riding is just as storied, even if it’s not as long.

After the First World War, the armed forces developed a keen interest in the strategic potential of motorcycles. They had proved themselves suitable mounts for dispatch riders due to their speed and durability, but many manufacturers felt that they had not yet fully explored all of the possibilities inherent in a two-wheeled motor vehicle.

In the short period of calm before the Second World War, many motorcycle engineers experimented with creating specialised military machines that were capable of more than just simple dispatch missions. Many of these prototypes were fitted with armour plating and mounted weapons. There is even an account of an anti-aircraft bike that had a small cannon mounted on the front of it.

The Bersaglieres had been using fairly ill-equipped machines from the early Twenties up until 1928, when Moto Guzzi received its first order of 245 specially adapted motorcycles. These were basically standard ‘civilian’ GTs, except that they had sprung frames. These bikes did the job well enough, but now demand had peaked for a motorcycle built specifically for the military. In 1932 Moto Guzzi brought out the GT 17 – a bike closely modelled on the existing GT 16, but ‘re-imagined’ with warfare in mind.

It was the first motorcycle that Moto Guzzi made expressly for the armed forces. It featured a 498cc single cylinder, opposed valve engine and three-speed gearbox built together as a unit, almost 30 years before British bike giant BSA began experimenting with unit construction. It also had an external flywheel and magneto ignition. The cylinder head and barrel were cast iron, and the engine ran alongside a Dell’Orto MC 26F carburettor. The motorcycle could produce 13.2bhp, which was more than enough power to shift both the bike and any mounted machine guns that might be fitted to it.

In many ways the GT 17 was similar to its forebear, the GT 16. The swinging-arm frame with Halford-type dampers was much the same and the combustion chambers of both bikes were fitted with a clever device that stopped the valves from ‘dropping in’. The two-seater version of the GT 17, however, did differ rather a lot. It had a second saddle fitted over the rear mudguard, collapsible handlebars, and it was possible to adjust the springs to cope with any additional weight. The fuel tank was also a touch shorter to accommodate the extra seat.

The GT 17’s gearbox had closer ratios than its predecessor, and the exhaust gases were pumped out through a double-barrelled silencer. As this was a bike built for conflict, light machine guns could be mounted on the handlebars. Interestingly, the seat could be tipped up to provide structural support to the motorcycle (and a bit of protection for the rider!) while the gun was firing. The bike’s rider – or in this case, gunner – would have to sit on the motorcycle’s chassis while the seat was up.

This was most likely a very uncomfortable experience, but if you’re trying to ride a motorcycle and operate a machine-gun at the same time, comfort is probably pretty far from your mind.

The GT stayed in production until 1939, by which time 4810 machines had been built for use in the military.