Although there is no class for unlimited capacity machines in the S.C.T.A., Bobbie Kelton riding the Harley-Davidson prepared by Bus Hood, established a fastest-ever speed of 168.77 m.p.h. before the Harley seized up. Tommy Smith, of Turlock, California, came off a Triumph Thunderbird while travelling at nearly 140 m.p.h. When the smoke and salt-dust died down, the irrepressible Smith stood and waved to the officials to show no serious harm was done. 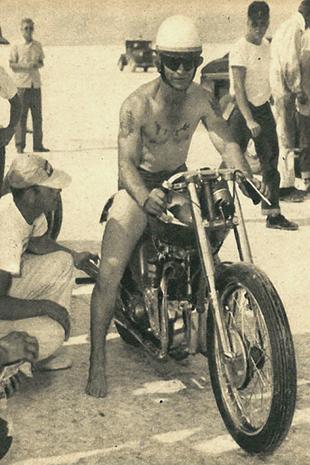 Smallest machine present was a 15 cu. in. (250 c.c.) Indian Brave ridden by Delbert Branson. The little side-valve single touched just over the 87 m.p.h. mark on one run and turned in an average of 80.62 m.p.h. for the two-way run. Next year it is anticipated that this doughty little model will manage another 10 m.p.h. Delbert claims that he has only just scratched the surface so far! Next man to try his luck was Lloyd Bulmer on a 21 cu. in. (350 c.c.) KSS Velocette. On his first run he established a record of 119.87 m.p.h. Immediately he turned round to make the second run through the traps, but found the timekeepers' clocks had failed. Trying again, he ran out of fuel and bought some strange mixture from a rival. This brew caused his piston to tighten up.

Short-lived was Rich Richards's record in the 35.50 cu. in. (500 c.c.) class of 129.76 m.p.h. achieved on a Triumph Tiger. He had raised by some 3 m.p.h. the record set up by Bud Hare a year earlier, but this was in the early part of the week; three days later, along came Hare to record a speed of no less than 134.597 m.p.h. Rich may well have bettered this figure, but a peek under the Triumph's tank showed the con-rods had 'grown'  during the high speed, and the pistons were joining company with the valves.

It is worthwhile placing on record that the engine failures at Bonneville were not caused by a few high-speed dashes. Many of the boys there had put in as many as 300 peak-revving miles during the week—and if there is an off-colour component in the machine, this sort of treatment will soon find it out!

Last official day of the week saw Marty Dickerson on his big 61 cu. in. (998 c.c.) Vincent return the best speed (141.72 m.p.h.). He had captured the record earlier in the week, but on the succeeding day he added another 0.03 m.p.h. to his previous best. Marty's Vincent is probably the prettiest machine ever to grace the salt at Bonneville — it is finished in a shade of opalescent blue, and the way in which it skims over the flats shows that the spit-and-polish is not confined to the exterior only. His speed, incidentally, was 52 m.p.h. up on his 1951 figure. 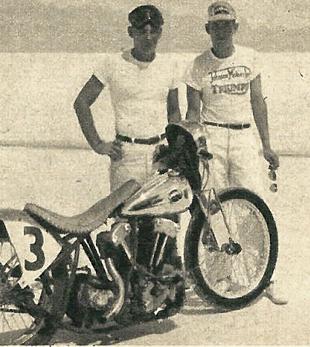 Rumour Was True
Early on Sunday morning, the rumour went round that Bill Johnson, West Coast Triumph distributor, was going to hire timekeeper Otto Crocker and ambulance driver Jack Purdy to stay for another day. The cost would be about $150 for the two; a lot of money, but nothing like the $2,200 Johnson paid out last year when all the equipment had to be brought to Bonneville.

The rumour was true, and on Monday morning the party, consisting of Bus Schaller, Jack Dale, Bud Hare, 'Blackie' Bernal and Bill Johnson, took over Bonneville. Bud Hare went out for a practice run and hit a new record of 138.142 m.p.h. The timekeepers ran out to hold him for a return run so that he could qualify for an official run (two runs, one in each direction have to be made to establish a record). He set off down the traps and his average-speed worked out at 134.597 m.p.h. — a record for the 35.50 cu. in. class.

'Blackie' Bernal then hurled his Triumph Thunderbird down the salt to establish a record of 144.338 m.p.h. (40 cu. in. category). Bus Schaller's Thunderbird, ridden by Jack Dale, then tried to wipe out Bernal's effort — first run, 148 m.p.h. It looked as if Bernal would not hold his record very long — but on the return, the Triumph cracked up, and that was that.

So ended another S.C.T.A. field day, an especially meritorious one when one remembers that all the machines are privately owned, tuned and financed. With the new small-capacity classes, and possibly an unlimited c.c. class, next year should prove better than ever before.