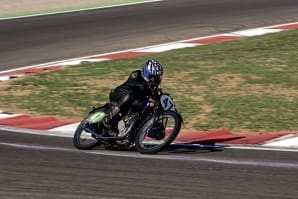 There is nobody alive today that is as passionate about racing Rudges as Mervyn Stratford – he has been campaigning the same 1934 four-valve 250 for nearly 50 years.

If you saw him stand alongside his Rudge, you might think it was impossible for anyone so tall to get the best out of such a small bike.

But boy, would you be wrong.

The specialist engineer wrapped his gangly frame around the Stratford Rudge to win his first race in 1968 and he took the VMCC 250cc championship a year later.