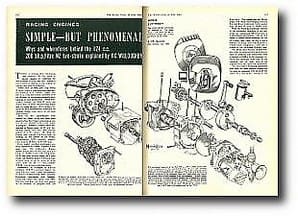 There is nothing more fascinating than progress. In the world of racing engines its yardstick for measurement is b.h.p.-per-litre. Power is thus related to capacity so that engines of various sizes can be compared. When, back in 1938, Joe Craig wrung 50 b.h.p. from a twin-overhead-camshaft, five-hundred T.T. Norton single, that 100 b.h.p./litre was widely reckoned to be the ultimate for an unsupercharged engine running on non-alcohol fuel. Other four-strokes, notably the B.M.W. twin and Gilera four of 1939, bettered that figure only by using blowers. Two-strokes, because of their fundamental restriction on cylinder filling, were never in the hunt unless blown.

After the war superchargers were banned for classic racing and some years passed before Joe Craig's achievement was seen as just another rung in the ladder of progress. Smaller cylinders were recognized as being easier to fill and permitting higher revs (the 1938 Norton peaked at 6,250 r.p.m.). By 1954 Dr. Froede had reached 156 b.h.p./litre by pushing up the power of the world-championship NSU two-fifty double o.h.c. twin to 39 b.h.p. at 11,500 r.p.m. 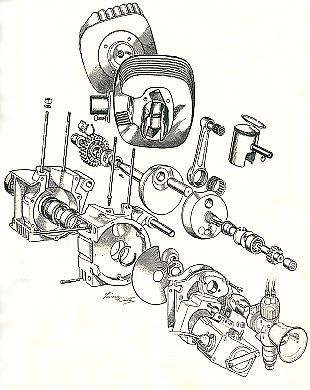 Meanwhile, at Zschopau in Eastern Germany (D.K.W.'s pre-war home), the small MZ race team—under the guidance of Walter Kaaden – had been patiently developing two-strokes with Zimmermann-type rotary inlet valves since 1953. And last year they put their best engine in the forefront of progress with 200 b.h.p./litre. That engine was the 124 c.c. single with which Ernst Degner won the East and West German and Italian grands prix. It gave 25 b.h.p. at 10,800 r.p.m.

When the breathing limitations imposed by the mechanical simplicity of the two-stroke are considered, 200 b.h.p./litre is a phenomenal achievement. And the MZ engine is simple notwithstanding the use of a rotary inlet valve; for this is just a half-disc of spring steel, 4¾in diameter X 0.016in thick, clamped to a hub that is splined to the right-hand flywheel shaft.

The two-stroke's breathing limitations stem from the short opening periods for the ports as compared with those for the valves of a four-stroke running at the same r.p.m. Even though the rotary valve permits asymmetrical timing and hence a longer duration of opening than is feasible with a piston-controlled port, the MZ inlet period of 205 degrees is only about two-thirds that of a racing four-stroke. The transfer period of 125 degrees, during which the cylinder is charged, is but two-fifths of the four-stroke's inlet period.

On the exhaust side the MZ's ports are open for 175 degrees, just over half the four-stroke's exhaust period. (Even so, the effective length of the power stroke is only 60 per cent of the nominal 54mm.)

And at peak revs the 25-degree period between exhaust and transfer port opening allows only one 2,600th part of a second (0.00038s) for the pressure of the burning gases to drop low enough to let the fresh charge in from the crankcase.

Trained as an engineer in Chemnitz before the war, Kaaden raced two-strokes made by himself for four years before joining MZ at the end of 1952. Although his own engines had piston-controlled in let ports, he used rotary valves at MZ right from the start. This was because Zimmermann engines were already giving much better results.

The first MZ racer was a three-speed one-two-five single with the conventional two transfer ports; its two exhaust pipes were at the rear of the cylinder. Idea of the rear-facing exhausts was to achieve the best gas sealing between crankcase and exhaust ports; for con-rod angularity causes the piston to thrust against the rear cylinder wall on the downward stroke, leaving the running clearance at the front.

Except for a few races last year, when forward exhausts were tried (to slim the machine between the rider's knees), racing MZs have retained rear exhausts. Overheating is obviated by using very deep finning and by machining back the face for the exhaust-pipe adaptor as far as possible – this keeps the port extremely short, so minimizing heat absorption from the outgoing gases. The 1961 experiment confirmed that front exhausts took the edge off acceleration.

Starting the season with 9 b.h.p. at 7,800 r.p.m., the 1953 engine finished with 11.75 b.h.p. as a result of larger transfer and exhaust ports, a higher compression ratio and changes to the length and taper angle of the open, conical exhaust pipes. The next year the unit had four speeds and further tuning pushed up peak power to 13 b.h.p. at 8,000 r.p.m.

A much more interesting departure was an opposed-piston single with a crankshaft above the cylinder as well as below. The two crankshafts were connected by sprockets and chain, and a separate carb fed each crankcase. The justification for the extra height, weight and complication was a desire to get away from symmetrical timing of transfer and exhaust ports and obtain one-way gas flow. 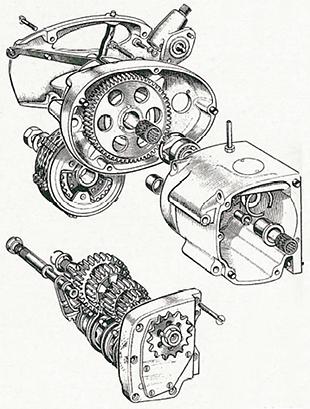 Since the upper (exhaust) piston had a 15-degree dead over the lower (transfer) one, the exhaust ports were opened and closed before the transfer ports; it was hoped that this would result in better cylinder filling and less loss of fresh charge. A disadvantage was the excessive length of the transfer passages from the top crankcase. Bench tests showed that any increased punch in the cylinder never reached the gearbox output shaft; 12 b.h.p. at 9,000 r.p.m. was maximum power, so this layout, too, was abandoned.

For 1955 the 13 b.h.p. single was further developed; the most noticeable change was to a single exhaust with a baffled outlet. On a racing two-stroke, cylinder filling and hence power are profoundly influenced by the exhaust system. Its function is first to create the greatest possible depression in the exhaust port during the transfer phase, so helping the fresh gases in; then to reflect back a pressure wave from the baffle to prevent any of the charge from escaping in the closing stages of the exhaust phase.

Calculations involving the temperature and speed of the exhaust gases make it possible to determine theoretically the optimum pipe length from port to baffle. But that is only the first step in developing a successful exhaust system. From that stage, dozens of painstaking experiments are called for. Induction and transfer layouts are equally critical; they, however, are decided solely by experiment.

The baffled exhaust pushed maximum power up to 15 b.h.p. at 9,000 r.p.m. At that time the MZ was winning national and international races though it could not quite match the one-two-five D.K.W. in world-championship events.

By then high revs were becoming an embarrassment; and so was the steepening of the power curve, which meant a narrowing of the useful rev band. The race department was expanded to include a draughtsman, Erich Bergauer, who solved the second problem by designing, for 1956, the present six-speed gearbox.

Worst sufferer from high revs, especially because of its hot running and scanty lubrication, was the small-end bush; it was replaced by a much less sensitive type of bearing – caged needle rollers. At the same time more robust main bearings were fitted, and the big-end rollers reduced in diameter to 3mm to arrest skidding.

The engine-speed magneto also jibbed at the high revs, so a change was made to battery ignition, though with the contact breaker still running at engine speed. And the net result of these improvements? A boost to 16.5 b.h.p. at 9,200 r.p.m.

In 1956 there was another ingenious but abortive experiment. An engine was made with the cylinder horizontal and the inlet valve feeding into the top rear of the crankcase, plumb on the centre line. Primarily, the aim was symmetry of crankcase filling; an added attraction was more direct big-end lubrication and cooling. (The present side location of the inlet port makes it inadvisable, for big-end reliability, to reduce the oil content in the petrol below one part in 22; vegetable-base oil of SAE 20 viscosity is used.)

But blanketing of the crankcase by the hot cylinder reduced volumetric efficiency and no more than 14 b.h.p. was ever obtained. Worse, piston seizures were frequent and the skew gears that turned the valve drive through 90 degrees proved unreliable.

For the last five years no fundamental design changes have been tried, but intensive development has been rewarded by an overall power boost averaging out at not much short of 2 b.h.p. a year.

The biggest single gain (about 11 b.h.p.) came from the introduction of the third transfer port, placed diametrically opposite the exhaust and fed through a window high in the front of the piston skirt. But initially the scheme was tried for reliability, not power. Engine speeds beyond 10,000 r.p.m. had begun to give the needle-roller small-end bearing a hard time; the third transfer port ensured a flow of cool, oil-laden gases over the bearing throughout the transfer phase.

For really high performance port layout is critical, and a manometer is used to check the speed of the incoming gases at various places in the cylinder. Best results are obtained when the gas speed through the third transfer port (82 feet per second) is appreciably higher than that through the others. Moreover, the third port directs its stream 30 degrees upward, whereas the other streams have very little upward inclination. The side streams, however, converge at an included angle of about 120 degrees. 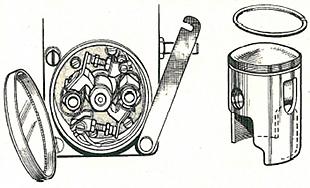 More trouble was experienced with the contact breaker, too. So in 1960 its speed was halved by gearing in the crankcase right-hand cover; this, of course, necessitated two sets of points operating alternately. Last year the battery and coil were replaced by a rotating-magnet magneto, also driven at half engine speed; this avoids a lot of wiring and the bothers of charging and transporting batteries.

The simplicity of the MZ layout, says Kaaden, is a boon only so long as you are content with a peak power of 20 b.h.p. Above that performance level, engines become temperamental and each needs individual treatment. Copying a super engine as closely as humanly possible usually fails to duplicate its performance.

For this reason detail specifications vary. Primary compression ratio is between 1.3 and 1.5 to 1; higher ratios cause blow-back through the carburettor, whatever the length of inlet tract. Secondary compression ratio (adjusted by varying the thickness of the cylinder-head copper gasket) is about 15 or 16 to 1. Inlet port timing may vary five degrees either way from the nominal figures. And width of the piston window feeding the third transfer port may be as little as 18mm or as much as 22mm.

The sensitivity of the best engines makes demands on the rider, too. He must be able to go flat out in practice and judge the best position for the mixture-control lever; then, if necessary, the carburettor can be re-jetted for the race. Otherwise the engine may seize through running weak (with the mixture control wide open) or lose power if the control is closed appreciably. Full closure of the mixture control, to compensate for too small a jet, costs 2 b.h.p. because of the partial obstruction of the induction tract.

The curve of peak power, plotted against development time, is flattening, and Kaaden thinks there may not be much more to come. But ever since Ernst Degner pipped Carlo Ubbiali's MV Agusta in the 1959 Italian Grand Prix, the best MZ one-two-five engine has been at least a match for its keenest rivals.

Had it been possible for the factory to pay western currency and so retain a super-star of Gary Hocking's calibre, the first world title for a two-stroke must have gone their way. Indeed, if political interference (after he fled to the West) had not prevented Degner from riding his MZ in last season's final classic in Argentina, he might well have won the world's championship, for he held a two-point lead over Tom Phillis (Honda) at the time. And Degner's lead could have been unassailable, if earlier in the season his skill had been backed by that ruthless streak that makes all the difference in a close finish.