Such was the adrenalin generated by the TT atmosphere, everybody was on parade for morning practice at 5am, sometimes going from a party straight to the circuit before returning to the hotel for breakfast. Machinery seen in the cold light of dawn on the Glencrutchery Road was an excellent wake up call, spotting something new or unusual a bonus for the unearthly hour. After breakfast, we'd take a tour of workshops dotted around the back streets of Douglas, which is how we had a world 'scoop' in 1960. Beyond public view at the Nursery Hotel in Onchan, Honda mechanics removed fairings from their new 250cc four-cylinder racers, confident in the knowledge that that would be sufficient a 'fix' for our information-hungry sortie. Lawrie pocketed his sketch pad and photographer Geoff Riden packed his camera and the Japanese ambled away for their tea break. For want of anything better to do, I poked a finger up an exhaust port. Inside, I felt something odd. It was divided in two! "Lawrie, what do you make of this?" I asked. The expression on his face confirmed my suspicions. Geoff's reaction proved that our curiosity was not misplaced. This engine had two exhaust valves per cylinder! With the carburettors still in place, we couldn't check if matching inlet valves were fitted, though the exterior shape of the cam box indicated that this was indeed the case. 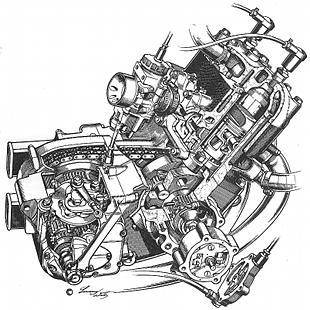 As the Japanese spoke little English, and were secretive, Lawrie drew some sketches of the cylinder head to test their reactions. Smiling politely at the first two, their astonishment at the third, a schematic four-valve layout, spoke volumes. Now he needed to know what type of layout, parallel or radial valves? Preparing the ground for some tricky questioning, he produced a packet of Opal fruits. Politely, they accepted and from there on, they helped fill in the essential details. What's more, four valves per cylinder had been used in their 125cc engines the previous year, though nobody outside of the factory knew. Back in London office, our 'scoop' got a frosty reception from Technical Editor, Vic Willoughby. "That's old hat," he told us. "Tell them Rudge and Excelsior gave up on the idea 30 years ago…"

That same week, Lawrie's friend Eric Oliver, with passenger Stan Dibben, making a come back to racing after five years' retirement, crashed in Wednesday morning's wet and miserably cold practice. As designer for most of Oliver's Nortons, Lawrie needed to find the cause of the accident on the flat-out left hander above Guthrie's Memorial where the outfit left the road, flew down the mountainside for about 100 yards, leaving behind the front forks close to the road. 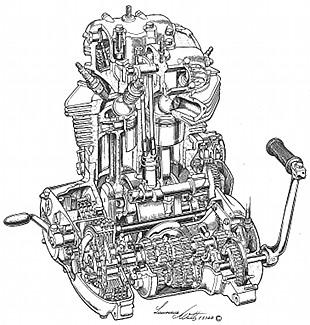 Lawrie knew what he was looking for, went straight to the steering head of the wrecked frame. He found part of the retaining bolt still in position, but sheared off flush with the underside of the head. He was able to unscrew it and, after searching the crash site, we also found the remainder of the bolt. From the marks on the thread, it appeared that the bolt had stretched, probably by being over-tightened, before snapping under stress. "I did recommend that the head bolt be of a much bigger diameter to cope with the unusual stresses imposed around the Mountain Course," explained Lawrie. "I hoped they had followed my advice, but this bolt is the same as used on the short circuit frames…"

Some of Lawrie's happiest hours were in the Isle of Man in the Fifties and Sixties.

"We worked all hours, but we managed to get in a few hours' relaxation when we enjoyed ourselves," he remembers. Which probably explains how, at the team's HQ at the Sefton Hotel, saucy pictures appeared on the woodwork between floors in the lift shaft, conduct which the management tolerated, along with the piano recitals by Dunlop's legendary race manger, Dickie Davis, or impromptu parties in whoever's bedroom happened to be vacant at the time.

A trip from Ronaldsway to Douglas, with Lawrie as Vic Willoughby's pillion passenger, ended in a heap when Vic, instead of saying 'Thank you little fairies' as they passed over Fairy Bridge on the Ballasalla Road, shouted his version — "xxxxxs to the fairies!" Within yards, a front wheel puncture had both of them off the staff Dominator 99!

Another excursion with Vic included a diversion over South Barrule and an encounter with a witch's coven! Everything was going fine until the witch noticed Lawrie, inspired by her, er, exotic wear, started taking photographs. Her looks, imprecations and body language suggested that LW go before the broomstick appeared. Thereafter, his luck changed for the worse, only improving when he destroyed all photos taken of 'Her Who Should be Obeyed' (or at least not photographed). 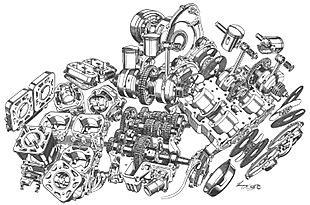 Ever hear of a rider taking his own photograph? It happened during a race when Lawrie had ferried ace photographer Bill Banks to Whitegates, on the exit from Ramsey. Out of harm's way behind the wall on the outside of the corner, Lawrie heard Banks yell "Cripes", or something similar, as he hurtled over the wall and landed beside him. There followed an almighty bang, a cloud of dust, debris, and then silence. Popping their heads above the wall they found a rider had hit it so hard that he'd triggered the venerable VN plate camera which Banks abandoned mid-vault. Back in the dark room, they found a spectacular image of a rider photographing his own crash. He survived, but his photograph didn't as editor Harry Louis binned it under his 'no accidents' house rule.

Meeting famous riders was part of the day job for Lawrie and he drove Bob McIntyre round the circuit the day after Bob's historic 100mph lap in the 1957 Senior while Bob relived the lap for back-seat passenger Vic's follow-up story. "The thing which most impressed us was Bob's composure about the whole thing, no drama, no close shaves, a precise comment on his racing line to the nearest inch. His immense concentration did not preclude Bob from remarking on where he'd seen me waving to him on the exit from Quarter Bridge," recalled Lawrie. 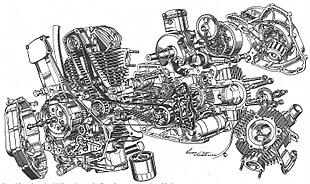 Disaster faced him one year when Lawrie returned to the Sefton after early morning practice having lost his precious sketch pad. Hurrying back to the deserted paddock, he found a lone figure waiting for him outside the Cadburys tent. "Is this what you're looking for? Honestly, I've not looked inside," grinned Graham Walker, then editor of Motor Cycling.

Walter Kaaden, the MZ race chief, became good friends with both Vic and Lawrie and spent many a happy evening in the back bar of the Sefton talking racing and, specifically, racing two-strokes. Which is how Vic and Lawrie unwittingly sampled an armoured personnel carrier as unwelcome 'guests' of the East German military at the height of the Cold War. "Walter invited us to visit the MZ factory at Zschopau, but Vic assumed that written invitation was sufficient to get us through the border, it never entered his head that visas were necessary," explained Lawrie. "We were in trouble from the moment we landed. Walking through no man's land close to the newly built Berlin Wall to reach Friedrich Strasse, we were shot at by border guards. 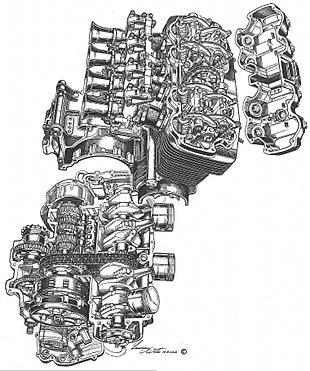 Rescued by a Russian soldier from whom we had earlier enquired the way, we eventually met Walter who had been waiting five hours for us in his three cylinder DKW car. As we had no visas, he had had to arrange a special vehicle to get us out of Berlin. This materialised as an armoured personnel carrier, with armed guard, in which we were driven across the city in the middle of the night to Chuneval airfield, an East German version of Templehof, where we had landed. At Chuneval, we finally got visas, plus a policeman who was to accompany us everywhere, including the trip to the factory in Kaaden's DKW. Wherever we stopped, for petrol or a pee, police appeared to check our papers. Uncannily, they knew our precise movements."

The previous year, Ernst Degner had defected to the west taking all MZ's engine secrets, so it was claimed, and selling them to Suzuki. With this Lawrie disagrees. "Walter Kaaden was extremely generous with information, welcoming anyone to its use. He joked that any secrets he had were still in his head and that the information was already available from published sources, much of it written by Vic and illustrated by me. For instance, to show accurate dimensions of the ports, I inserted a rolled sheet of paper into the cylinder and made pressings of the port shapes, which I then drew full scale. Any competent engineer could then replicate the insides of a racing MZ and its rotary disc valve, which had been pioneered by Zimmermann and further developed by Walter when he joined MZ."

Still working as a freelance at 74, Lawrie's views on Computer Assisted Design are typically forthright. "CAD is best at producing a commercial end product intended for production and replication. For my type of drawing, CAD cannot look around corners, can't emphasise — because its lines are constant thickness — can't create the illusion of perspective, it certainly can't identify materials or textures nor can it show welded seams. CAD can't paint, nor can it use weight of line for shape, or produce different techniques. God willing, I'm optimistic of being in gainful employment for the forseeable future!"